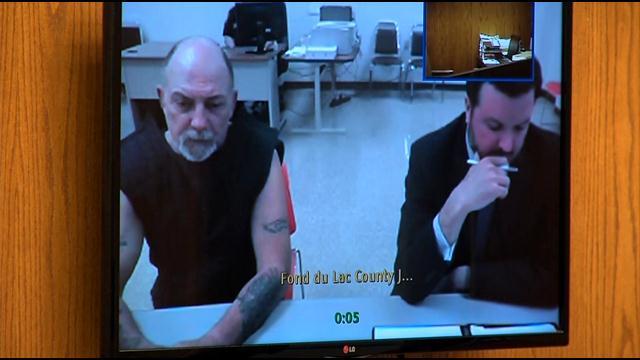 Appearing via video conference on Monday afternoon, Dennis Brantner, 61, was formally charged with the first degree murder of Berit Beck.

Bail was set at $1 million dollars.

Brantner was arrested Friday for the 1990 homicide. Investigators say he became emotional when confronted at the time of his arrest.

Investigators named him a suspect a year ago.

The criminal complaint says that on February 27, 2014, previously unidentified fingerprints recovered from inside the victim's van were matched by the state crime lab as belonging to Brantner.

Prints were left on a Burger King cup, an employee manual and a bleach kit, as well as under the front passenger seat and inside the middle door window and on a cellophane cigarette wrapper.

According to family, Beck did not smoke.

\"We have a couple of bankers boxes of information on this case and there is a lot of information to sort through,\" said Fond du Lac County District Attorney Eric Toney. \"We wanted to wait until we were satisfied we had admissible evidence to prove the allegations in court and that's where I feel we are at now.\"

The criminal complaint says Brantner has a history of violence against women,including holding his second wife at knife point after their separation.

He also was known to steal women's underwear and according to his co-workers had a picture of the Beck in his toolbox and claimed that she was his girlfriend.

\"This was a horrible tragedy then, it's a horrible tragedy now,\" reflected Fond du Lac County Sheriff Mick Fink. \"I was there when they found the van and I was there when they found the body. If you're going to ask me if I threw my hands in the air and said I found my guy, the answer is no and that's from the bottom of my heart. I believe this is a tragedy.\"

New details released in court papers say the teenager's body was found with a blindfold tied around her head.

The blindfold seemed to be a match for a ripped t-shirt that was found in her van that was discovered abandoned in a K-Mart parking lot two days after she vanished.

Her body was recovered in a ditch in a remote part of Fond du Lac County several weeks after the van was recovered.

Beck was 18 when she went missing from her hometown of Sturtevant on the way to a computer class in Appleton.

Investigators who spoke with Brantner said he told them \"I swear, I did not kill her, because I'm not that way.\"

But when he was confronted with the fingerprint evidence he claims to not remember things.

\"I don't remember how I got in the van,\" is one of the statements supposedly made by the Kenosha truck driver.

When asked if he disposed of the body he also claimed he didn't know because he couldn't remember and added if he did help dump the remains then he was \"so f---ing sorry,\"