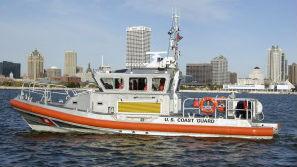 The Coast Guard reminds the public to be safe in, on and around the water during the Fourth of July holiday weekend.

Now that the weather is warm, Coast Guard 9th District units are seeing a high number of boaters, divers, kayakers, and beach-goers in and on the water. Last weekend the Great Lakes Coast Guard responded to more than 100 reports of distress, saving six lives and assisting 133.

The Coast Guard advises the public to take responsibility for their safety on the water. Everyone should be aware of, and obey, all federal and state regulations for recreational boating and navigation.

Boating accidents can happen very suddenly and you don't have time to put on a life jacket. Everyone can prepare for the unexpected by wearing life jackets and carrying proper survival equipment and communications.

In an effort to save lives, the Coast Guard recommends the following for all swimmers and boaters: