Coalition for Justice to child killer: "It'll be best if you turn yourself in" 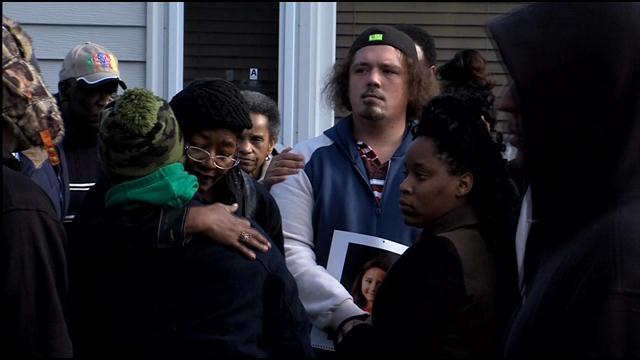 Member of the community group \"Coalition for Justice\" visited the northwest side home of Laylah Peterson Friday.

She's the five year old shot dead while sitting on the lap of her grandfather inside their home Thursday night.

Police say they are \"befuddled\" as to a motive. They are asking for the public's help in identifying a suspect or suspects.

Coalition members introduced themselves to family members outside a makeshift memorial in front of the home.

They then told the media that they have solutions to officer to stop gun violence in Milwaukee and demanded a meeting with the Mayor, District Attorney, Police Chief and Council Members.

\"If they don't want to participate we are prepared to move forward without them,\" Coalition member Shawn Moore said. \"This has got to stop. To the person that committed this crime, it'll be best for you to turn yourself in. We're not standing for it no more. It's over.\"

The group was formed after the officer involved shooting and killing of Dontre Hamilton in Red Arrow Park.

CBS 58 video shows they were part of the crowd that shouted down the Milwaukee Police Association President Mike Crivello at the prior night's Fire and Police Commission meeting when he tried to defend the actions of the now fired officer.

At the home of the slain girl the next day they sought to set the record straight.

\"The community only cares when police break the law. They only see groups and crowds standing up against the police. That's not true,\" declared Coalition member Khalil Coleman. \"We care about all causes for truth and injustice. We care about little kids getting shot and killed in the neighborhood that we grew up in and got to live in.\"

Coleman maintains that the goal remains bringing the community together in healing, but that it can only happen when citizens take action and due process is guaranteed.