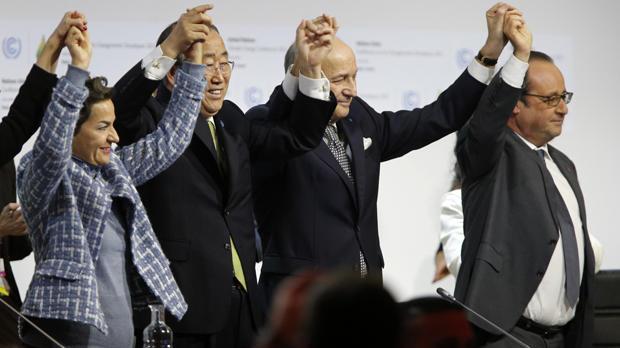 (CBS NEWS) Negotiators from 195 countries and the European Union agreed Saturday to a historic plan to slow global warming in a last-minute push during the 10-day talks.

Most of the 195 countries pledged to shift their sources of energy from fossil fuels to clean, renewable energy, with the hope of averting dangerous climate effects.

After the final overnight negotiating session, French Foreign Minister Laurent Fabius, the president of the conference, presented delegates with the final text, he banged the gavel, finalizing the agreement on a plan to slow global warming that came out of the Conference of Parties to the U.N. Framework Convention on Climate Change, or COP21.

"Nobody will get 100 percent of what they want," Fabius said. "What I hope is that everyone remembers the message of the first day, when 150 heads of state and government came from all around the world to say, 'The world needs a success.'"

Janos Pasztor, the U.N. assistant secretary-general on climate change, told CBS News the plan would "send a strong signal to the markets ... and private sector" that the world is moving "to a low-carbon, low-emissions world, so investing in new technology is the way to go."

"What it means is, for example," Pasztor said, "is get your act together, oil and gas industry, and develop these carbon capture storage systems."

The ultimate goal is zero emissions, though for some time to come, he added, it will still be "perfectly OK to continue oil and gas."

U.N. Secretary-General Ban Ki-moon said that 186 countries -- representing close to 100 percent of global carbon emissions -- had submitted their national climate plans. "This is quite encouraging," he said, adding that municipal and business leaders as well as civil society organizations were also at the conference to play a role.

The agreement's success will be judged on its ability to convince the world's investors that the intent to shift energy profiles from fossil fuels to renewables is real.

"I have absolute confidence in the ability of capital to move where the signal of the marketplace says 'go' after Paris," U.S. Secretary of State John Kerry said to the "Earth to Paris" summit earlier in the week.

The final deal includes the agreement and the COP21 decisions, which incorporates the voluntary targets that countries submitted.

Not everyone is thrilled with the final compromise. Some scientists complained that the final agreement is too weak and the included compromises mean it will not avert the dangerous warming. Others believed it will restrict the U.S. and other developed countries too much.

The agreement sets $100 billion to be given from rich countries to poor countries to adapt to climate change.

Included in the agreement is a temperature goal to slow the pace of warming, but that, along with who would pay for damages brought on by global warming, and which countries would contribute to the $100 billion to be raised, were the contentious issues, which dragged out the negotiations for an extra day.

In the agreement, the almost 200 countries will convene again to show the progress they've made in reaching their targets. Then, they will meet again to "ratchet up" their proposals.

Another goal of the agreement was to save the world's forests.

Agreeing to reporting requirements -- how countries would show their progress -- proved difficult. India wanted a voluntary measure. Locking horns with the U.S. and European Union countries, the China delegation wanted "differentiation," what its deputy chief, Liu Zhenmin, said meant that rich countries, a designation that does not include China or India, would make deeper emissions cuts and pay more into the fund.

The $100 billion fund was structured in a way so that countries that reduce the use of fossil fuel don't make the cuts while other countries benefit, which was the fear of several American lawmakers.

By making the reporting of the emission reductions targets legally binding, even if the agreement is not, the U.S. delegation argued that the world will be able to see, for the first time, what each country is doing, or not doing, to keep their word. To encourage negotiators, at the conference, Kerry also announced the doubling of the money the U.S. provides for climate adaptation to $860 million.

The message to industry to develop new technology for clean energy was abundant at the Le Bourget conference center, outside of Paris, where the negotiations took place.

The United Nations Environment Program (UNEP), which focuses on the development and distribution of new climate change mitigation technologies (CCMTs), showcased a report which used data on patent applications, trade in these technologies and governments' foreign direct investment to look at the rise of alternative technology in Europe. It concluded that climate change policies, including taxes on polluting emissions and feed-in tariffs for renewable energy, have risen dramatically.

Also, the United Nations Climate Change Secretariat briefing book for delegates said, "Alongside energy efficiency, and other non-fossil fuel sources, carbon dioxide capture, use, and storage (CCUS) is another element to a low emissions future."

At the conference, a public-private coalition was announced that would increase spending on clean energy research and development in order to increase wind and solar power.

"It will be a big step forward for all of humanity," Fabius said Friday.

"The agreement is a mechanism for how countries will behave - the new rules of the game," Pasztor told CBS News. "Whatever they commit to is not legally binding but they have to report ... It is not name and shame, it is name and encourage."