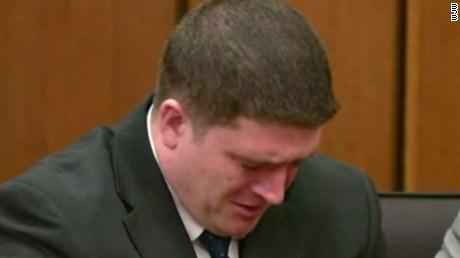 (CNN) A white Cleveland police officer who stood on a car and shot the vehicle's two unarmed black occupants after colleagues already riddled the car with bullets in 2012 was found not guilty Saturday in their deaths -- with a judge ruling his actions were constitutionally justified.

Cuyahoga County Judge John P. O'Donnell, who reached the verdicts after a several-week trial, declared Officer Michael Brelo not guilty of voluntary manslaughter and felonious assault in the deaths of Timothy Russell and Malissa Williams following a 20-minute car chase.

Brelo's actions -- jumping onto the stopped car and firing 15 shots into the vehicle after he and his colleagues fired more than 100 times -- were constitutionally justifiable because it wasn't yet clear that any perceived threat to the officers was over, O'Donnell ruled.

Emotions ran high outside the courtroom in Cleveland -- where public outrage over several recent police shootings has been palpable -- after the verdict was read. One woman wept inconsolably on its steps.

Some held up signs, outraged that Brelo was not convicted.

\"All I know is that I don't trust police no more. No police. None,\" proclaimed one man, adding that \"I can't recover from this. ...This verdict isn't real. This verdict is fake.\"

The killings of Timothy Russell and Malissa Williams were among several police incidents prompting outrage in Cleveland in the past few years, and was one of the cases highlighted by a 2014 Department of Justice report that found that Cleveland police had a pattern of using excessive force.

Brelo's lawyer celebrated O'Donnell's decision and the efforts that led up to it. He portrayed the case as a \"David vs. Goliath\" fight, with his client being the underdog.

\"The prosecution in this case spared no expense and was, in fact, ruthless,\" attorney Patrick D'Angelo told reporters. \"But notwithstanding that, we fought tooth and nail, as you saw in this courtroom.\"

What led to the deaths of Russell and Williams, prosecutors said, was a chase that began when a car driven by Russell backfired -- a noise that officers thought was caused by gunshots -- in Cleveland on November 29, 2012.

When the chase ended in a middle school parking lot, about a dozen officers fired 137 shots at Williams' car, Cuyahoga County Prosecutor Timothy McGlinty said. Each was struck more than 20 times, according to the U.S. Justice Department.

Of the 137 shots, according to prosecutors, the only ones that weren't legally justified were the final 15, allegedly fired by Brelo.

But Brelo got on top of the car's hood and \"fired at least 15 shots, including fatal shots, downward through the windshield into the victims at close range as he stood on the hood of Mr. Russell's car,\" McGlinty said.

Prosecutors said the final 15 shots were unlawful because they had no chance of escaping and they no longer presented a threat to anyone's safety.

Brelo's defense argued that not only did he and other officers believe the suspects were armed and that the officers' lives were in danger, but also that prosecutors can't be certain whether Brelo's final 15 shots were the fatal ones, CNN affiliate WJW reported.

Brelo would have faced three to 11 years in prison on each voluntary manslaughter count had he been convicted.

Brelo was indicted in May 2014. Five other officers face charges of dereliction of duty in the chase and shooting.

The verdict comes during a 12-month period in which the deaths of other African-Americans at the hands of police or while in police custody -- in Missouri, New York, Baltimore as well as Cleveland -- have caused turmoil in American cities.

In Cleveland last year, an officer shot and killed Tamir Rice, 12, who was holding a pellet gun at the time. Authorities say the investigation of that shooting will be finished soon.