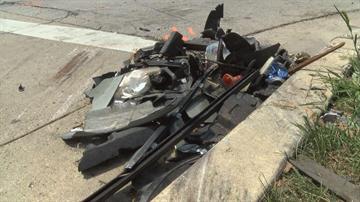 MILWAUKEE -- Pieces of fender, wiper blades and -- ironically enough -- a broom littered the intersection of 17th and State Streets in Milwaukee over the weekend.  It's the kind of crash aftermath Ernest Gibson sees from his downtown hot dog stand all the time.

\"It takes a couple days before they pick it up, I guess, but right downtown, they clean that up real quick,\" Gibson said.

Gibson thinks City of Milwaukee crews should pick up the pieces of a wreck immediately.  But he says that rarely happens.

\"Somebody else might run into it, the pieces of the car or whatever's on the ground,\" Gibson said.

\"It's already bad enough, you ride down Capitol [Drive], you crack the rims on the potholes,\" concerned passerby Creo Alexander said.  \"Now just imagine what you do to those rims when you run over somebody else's bumper.\"

Milwaukee Police say they handle small clean up work, but usually call in the Department of Public Works to sweep up large pieces.  A DPW spokeswoman tells CBS-58 there's no specific time frame to get the work done.  They simply try to take care of it as soon as possible.

\"We want to have the roadways clear so we don't have another problem,\" Milwaukee Fire Department Lieutenant Schuyler Belott said.

Milwaukee Firefighters almost always get called to crash scenes too.  Their priority is treating the injured, but after that, it's making sure the roadway is clear of chemical spills.

\"If we have oils and transmission fluid or anti-freeze, it creates a slippery road so that there's a potential for another accident after we leave,\" Belott said.

Firefighters help sweep glass and other solid pieces to the curb or median to get it out of traffic, but ultimately it's up to the DPW to take the trash away.

Milwaukee Firefighters add if a crash carries onto your property, they'll help clear the major damage and wreckage, but the cost of getting rid of additional chemical spills could end up costing the home or property owner.