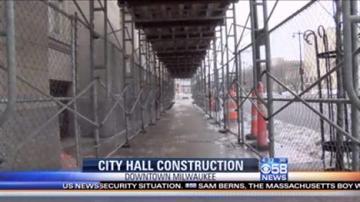 MILWAUKEE -- The City of Milwaukee Judiciary and Legislative Committee approved an $8 million settlement that will take the cost of City Hall repairs gone wrong out of the hands of Milwaukee taxpayers.

Renovations began at the 120-year-old City Hall in 2008 at a cost of nearly $76 million, replacing more than 4,000 Terracotta units. A piece of the building came crashing down onto Market Street in 2011, forcing crews to surround the building with scaffolding.

The city then filed suit, alleging that grouted Terracotta units had been breaking down since the project was finished. The city reached a settlement with the contractor last July, and the $8 million settlement has been approved, the cost of repairs will not fall on taxpayer's hands.

The full city council will still have to make a final decision, but is expected to vote on January 21st.