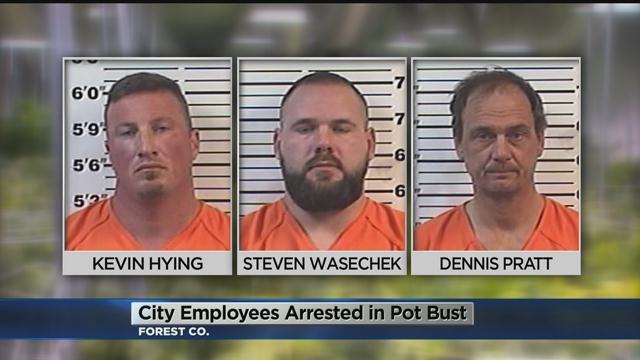 Two City of Milwaukee workers were busted for growing marijuana up north.

It's not the first time this particular department has had trouble.

Two of the men, Kevin Hying, 35, of Big Bend and Steven Wasechek, 32, of Milwaukee worked as inspectors for the Department of Neighborhood Services, DNS. They both resigned earlier in the week.

A third man arrested is Dennis Pratt, 51, of Waukesha.

The men were arrested in Forest County, Wisconsin on Saturday.

Authorities yelled, “Sheriffs Department, get your hands in the air,” as the three men were arrested next to a truckload of marijuana.

They were cutting the plants with garden pruners when authorities arrived.

The criminal complaint says the men grew over 600 pounds of marijuana near a cabin that belonged to the Wasechek family. Although, the marijuana plants were grown on a neighbor's property.

Dennis Pratt did not work for DNS, and has already had an initial appearance. His lawyer told CBS 58 over the phone they have no comment.

The arrests come just a year after another DNS worker was arrested and was charged with keeping a drug house in September 2015. She was later found not guilty by a jury.

A DNS spokesperson says the city requires drug testing before any employee is hired, and employees are expected to be "fit for duty." That means he or she can be disciplined if their supervisor suspects they are under the influence of drugs or alcohol.