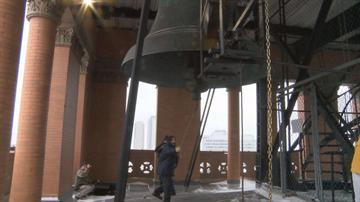 MILWAUKEE -- One year's time and the wounds still feel fresh.  December 14, 2012 Adam Lanza murdered his mother and  then shot and killed 20 children and six adults at Sandy Hook Elementary School in Newtown, Connecticut.

Saturday, the bell at City Hall in Milwaukee rang for each of the victims.

Milwaukee Mayor Tom Barrett took the weekend off to rest after his medical emergency, but issued this statement:

\"The Newtown, Connecticut shooting was a horrible event.  The loss of lives of both young people and  brave adults was a tragedy we should not forget.\"

Sandy Hook and another shooting Friday at a high school in Colorado have people again talking about gun control.

\"There are entities that would take those tragedies and try to use them for political leverage to  accomplish an agenda,\" Clarke said.  \"I don't like doing that.  I think it's disgusting when that sort of thing happens... Let's see where we as a society can do better.\"

\"We're letting people who have demonstrated time and time again that they're going to do a bad thing with a firearm and we're letting them off the hook, so to speak,\" Clarke said.

\"Gun violence has destroyed too many lives.  We  need to continue efforts to advance reasonable approaches to reduce bloodshed.\"

The Sheriff stresses those reasonable approaches should not include tougher gun laws.

\"To right away go to the gun thing and the second amendment I just think is missing the point,\" Clarke said.