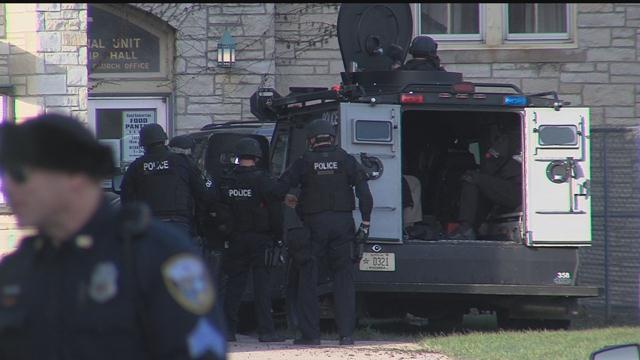 A group of members at a Milwaukee church found sanctuary in their building Sunday morning after an SUV careened toward the doors of the steeple.

It happened in the middle of a four hour stand-off between police and a man who authorities say was having a mental health crisis.

Milwaukee Police responded to  Good Samaritan Church of God in Christ around 11 a.m. because a gold SUV was parked across its lawn.

Church leaders say it was calm inside the church while outside the doors it was much more tense. Authorities did not know if the suspect was armed or not.

When the armored police vehicle known as 'the bearcat' approached the suspect floored it, speeding toward the doors of the church.

The bearcat followed and wedged the gold SUV between itself and the building. That's when police moved in on foot.

Chief Ed Flynn said they had some idea who the suspect was.

"He self-reported to us today that he had lost or mislaid his meds and his conversation clearly indicated to us that he was in crisis," Chief Flynn said.

When police could not get the suspect out of the vehicle voluntarily - the tactical response team used tear gas.

The man surrendered - authorities say he was unarmed - and he's since been taken to a hospital for a mental health evaluation, Chief Flynn said.

About two dozen church members (mostly children) finally exited the building after more than four hours because of the stand-off.

"We kept on praising god and giving god glory. And we prayed for the man and the vehicle. That's what we did," Pastor Herbert Robinson of Good Samaritan C.O.G.I.C. said.

Chief Flynn says that man - who is in his 60s - has been committed multiple times including last October when police caught him vandalizing a squad car.

No charges have been named at this point.