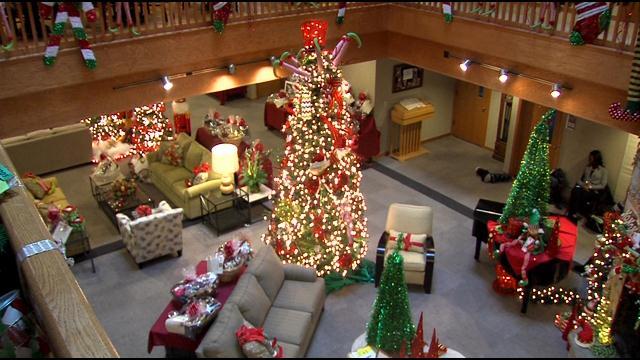 The stockings are hung, snowmen are smiling and elves are missing in trees.

\"It is very stimulating to the say the least,\" said Cathy Scholl.

Inside the walls at the Ronald McDonald House in Wauwatosa, there is no worry that Christmas will be late because it's already arrived.

It has been transformed into the Christmas Fantasy House. The House is a long-standing Milwaukee tradition that explodes with holiday cheer and this year, it is taking on new meaning.

Scholl is a volunteer member of the committee.

\"Everyone loves Christmas and we all hate to have sick children in our lives,\" she said.

Noah's mother Rachel said, \"He has been listed status 1A for a heart transplant since he was three days old. On August 8, he got put on, so we've been waiting.\"

Not knowing when the waiting will end is the hardest part for his Rachel and her husband Tyler. But, staying at the Ronald McDonald House makes the stressful days and nights easier. The couple also has a two-year-old son, Nathan.

The Ronald McDonald House is a home away from home for thousands families across the country who come to Milwaukee seeking the best medical care for their critically ill child.

\"We ask our families for a donation of $20 a night to help fund their stay,\" said Jacquelyn Wahlberg, marketing and public relations manager with the Ronald McDonald House. \"Only about one-third of our families are able to afford that cost. In reality, it costs us $114 a night to host a family.\"

The Christmas Fantasy House hopes to raise 50-thousand dollars through a raffle, silent auction and a sweet shoppe. The money will help provide a continued place of comfort, support and hope at a time the Ronald McDonald House needs it most.

\"For the last five years, we've had a waiting list from five to 20 families we couldn't accommodate because of our space limitations,\" continued Wahlberg. \"So now, with this expansion opening and with our rooms being refurbished, we're going to be able to accommodate up to 70 families a night before the end of the year.\"

This is the first time the Christmas Fantasy House has been held outside of a residential home. Though the committee will likely return to tradition next year, Scholl said the future with the organization looks bright.

\"Hopefully next year we'll find a house and we'll continue to use the proceeds to benefit the Ronald McDonald House,\" she said. \"But, we'll do it in a way that won't interfere with these kids.\"