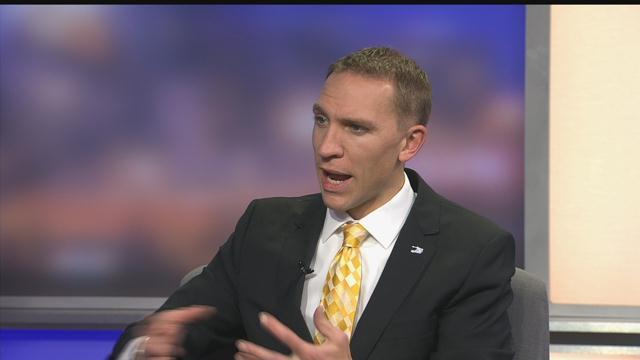 Candidate Chris Larson turned up his criticism of County Executive Thursday, painting him as an elected official who answers to nobody.

"He's making a big deal that he doesn't have to answer to anybody," Larson told CBS 58 in an exclusive sit down interview on the News at 4. "So, he's become nobody's County Executive but his own."

Just hours earlier, he was part of a group that delivered hundreds of signatures opposed to the law that allows the County Executive's Office to change curriculum or staff of struggling schools.

Something Larson and other critics call a take over.

A law was passed in Madison allowing this to happen, but Larson says Abele didn't have to go along.

"When he got these powers, whether he was seeking them or just took them, he didn't talk to the people who were trying to reach him until we started running for office. Suddenly, he's found religion in trying to do the right thing."

Abele and the man he appointed as Commissioner of the Opportunity Schools Partnership Program,  Dr. Demond Means, have promised that they will work within the MPS Charter system.

"It's a small victory that he's backing off his rhetoric to take over schools," said Larson.  "What I'm concerned about is what he will do if he's re-elected.  What he might do to take over public schools."

Larson says he will work to repeal the law if elected.

The Director of Communications for Abele, Melissa Baladauff issued this statement when CBS 58 News contacted the County Executive's Office for comment:

"There's so much that could be done just by having a conversation. If you call this (Abele's) office after business hours, you can't even leave a message. He doesn't come out to the public. He doesn't meet people. They don't have somebody in the office that's working for them."

Larson promised that if he becomes County Executive of Milwaukee County, his office will hold listening sessions in each of the 19 municipalities every single year.

Larson also downplayed the fact that he recently changed campaign managers, noting that he got back the same manager who helped him to victory five years ago.

"I like that the news needed something to chew on."

The full interview from the CBS 58 News at 4 is attached to this story.