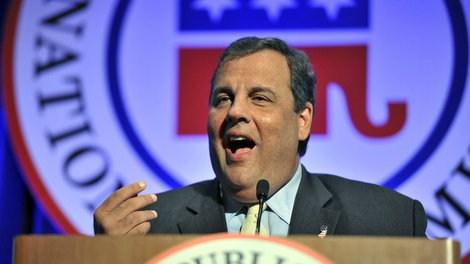 New Jersey Republican Gov. Chris Christie said Thursday that he was away from home a lot during the 2014 election cycle -- including his final five days on the trail when he hit 19 states -- and giving his family \"a good trial run\" for the future.

Christie, who is chairman of the Republican Governors Association, helped raise more than $100 million in the past year for GOP gubernatorial candidates, several of whom won governorships on Election Day in blue states.

During that his campaigning the 52-year-old governor, who has said he will announce next year whether he will run for president, kept in touch with his family.

Christie house rules prohibit cell phones until a certain age. \"No one gets a cell phone until you're 14,\" he said.

Three of his four children have cell phones. They Facetimed, texted and talked.

Christie said he is energized by campaigning. He told the story of his son Andrew, a student at Princeton, falling asleep on the plane when he traveled with Christie for a week to campaign with him.

\"What the hell are you doing?\" Christie said, nudging his son to wake him up.

Taking his headphones out, Andrew turned to his father and said, \"You are a machine. I am not,\" and went back to sleep.

A caller on the radio show Thursday praised Christie for telling a heckler to \"sit down and shut up,\" after he stood up to protest Christie's handling of Superstorm Sandy at an event just over a week ago.

\"If people want to keep punching you then eventually you have to punch back,\" he said.

\"That would be an interesting conversation,\" Christie said.