China: Seized underwater drone 'tip of iceberg' when it comes to US surveillance 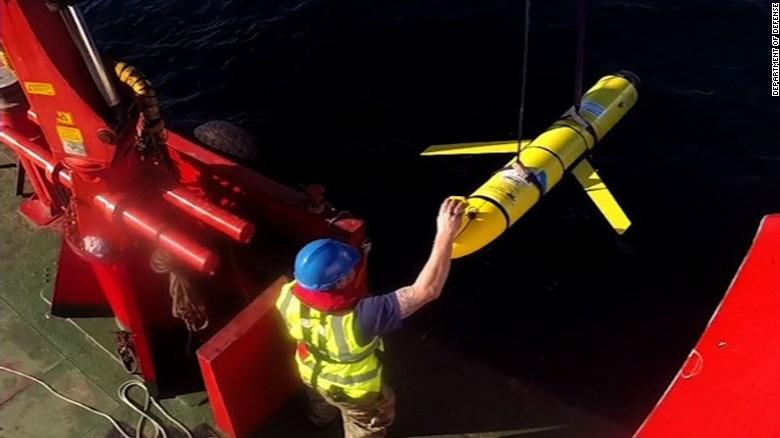 (CNN)A underwater drone seized by the Chinese navy is the "tip of the iceberg" of US military surveillance in the South China Sea, Chinese state media said Monday.

The Pentagon has said the underwater vehicle was an unclassified piece of equipment conducting routine operations but a commentary published in the People's Daily, the Communist Party's official mouthpiece, said the drone was linked to US efforts to "contain" China.

"The US side played down its drone activities, but its intentions behind them cannot be concealed," the commentary said.

"The drone that emerged from the South China Sea is just the tip of the iceberg in the US military strategy on China," it added.

China has agreed to return the underwater drone, but details of the transfer hadn't yet been agreed, the Pentagon said late Sunday.

The incident has emerged as the latest thorn between China and the US, where President-elect Donald Trump has shown himself increasingly willing to confront and challenge Beijing.

Hua Chunying, China's Ministry of Foreign Affairs spokesperson, stressed Chinese opposition to US naval activities in the region at a press briefing Monday but stopped short of saying the drone was spying on China.Zhang Baohui, a security expert at Lingnan University in Hong Kong, said he believed that the drone grab was deliberate but unlikely to be a response to Trump, who has upended decades diplomatic protocol by questioning a long-standing US position that the Taiwan is part of "one China."

Zhang said the fact that the grab was launched from Chinese a submarine-support vessel was likely linked to a perceived threat to China's small fleet of Type 094 strategic nuclear submarines that operate in the waters.

"China is super-sensitive to US surveillance in the South China Sea, and many in the US don't accept mutual nuclear deterrence," said Zhang.

"It's a confined area, and China feels its submarines are very vulnerable. It is my reading that China thought the US was using the drone to track down one of its submarines and they felt that had to act."

He added, that unlike the US and Russia, China doesn't have a huge ocean on its doorstep in which nuclear submarines could go undetected, and the East China Sea to the north is smaller, shallower and subject to Japanese surveillance.

China has built up military bases in the South China Sea, which is home to a tense territorial dispute.

"It is ours. It is clearly marked; we'd like to have it back and [would] like this to never happen again," he said.

The Pentagon said the UUV was an unclassified piece of equipment conducting routine operations and used around the world to gather "military oceanographic data" including salinity, water temperature and sound speed.

China's Ministry of Defense said Saturday that China had decided to transfer the underwater drone back to the US but said the US had "hyped up" the issue.

"It is inappropriate -- and unhelpful for a resolution -- that the US has unilaterally hyped up the issue. We express our regret over that," Chinese Defense Ministry spokesman Sr. Col. Yang Yujun said.Trump used Twitter to weigh in on the incident, eliciting a scathing response from the Global Times, a provocative but state-sanctioned tabloid.

"He bears no sense of how to lead a superpower," an opinion piece published in the newspaper late Sunday said.

"Even the US military did not use the term 'steal' to describe the move by the Chinese navy. Trump's second tweet makes people worry that he will treat China-US relations as child's play," it added.Shaun Rein, a Shanghai-based author and commentator, believed the seizure was a way for Beijing to respond to Trump's aggressive stance on China.

"China is signaling it cannot be bullied while at the same time showing it does not want to risk armed conflict or death of any sailors," he said.

"In the next month America should expect minor military provocations by China as well as more pressure on American business interests in China," he added.

Since winning the presidency, Trump has seemingly rewritten US foreign policy on the fly.

He took a phone call from Taiwan's president, upending decades of diplomatic protocol and questioned the long-standing US position that the Taiwan is part of "one China."

"China has kept a calm attitude toward his provocative remarks. But if he treats China after assuming office in the same way as in his tweets, China will not exercise restraint," the Sunday op ed said