Children's Hospital one day after shooting 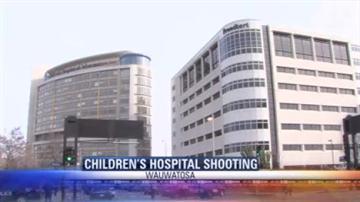 MILWAUKEE-Hospital Officials held a press conference Friday afternoon and confirmed that they would review security at the facility after Thursday's violent confrontation between an armed felon and Milwaukee Police.

Things were running smoothly a day after the 22 year old suspect was wounded by an officer after pulling a gun on them as they tried to bring him into custody on a bench warrant.

A woman had called police  to report that Ashanti Len Hendricks was at the NICU and was possibly armed.

Hendricks was struck twice, reportedly in the arm and hand. He was transferred from the hospital to the jail Friday.

Nobody else was injured.

\"We gave patients who were on that floor the opportunity to move units and not one of them chose to.move.  They felt they were in the safest environment possible,\" Dr. Gutzeit said

The hospital will be reviewing the incident with law enforcement to determine if there should be changes to security.