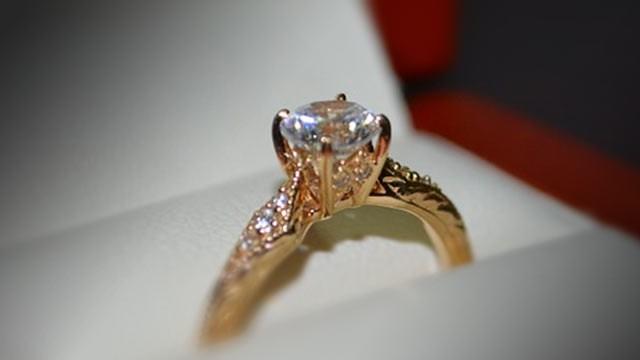 CHICAGO — Photographer Julio Salazar was doing a photo shoot on Saturday for a client in Chicago’s Millennium Park when he heard some commotion -- it just so happened, a couple was getting engaged.

He already had his tripod and lighting set up, so when he heard cheering, he turned and began snapping photos.

But when he looked at the photos, they were all dark.

“I didn’t even think I got it,” Salazar said. “Until I got home and started to do some editing.”

Once Salazar got home, he started working his magic and edited the photos. He had taken seven or eight photos of the couple, but only one was clear and in focus, CBS Chicago reported.

Salazar was able to capture the moment of a man proposing.

The couple had no idea Salazar took their picture, and he did not know them. Salazar wanted to find the couple, but had trouble locating them.

“My biggest goal was to get the photo to them,” Salazar said.

He took to Facebook in hopes of finding the couple to give them a copy of the photograph. He started on two virtual garage sale sites and his photography page creating posts on Sunday asking for help.

The post read: “I need everyone’s help. I’m a photographer and I was doing a photoshoot near the Bean downtown yesterday. As I was shooting I noticed a proposal happening right next to me. I captured the moment with out them knowing and wanted to get a print to them. If anyone knows who these people are please tag them or send me their Facebook. Thanks.”

“It just blew up from there,” Salazar said. “People started saying I’m going to send this to this news station and that news station.”

CBS Chicago was the first one to share the photo and post within 30 minutes – and the sharing continued from there, Salazar said. The post got so far, that he even received a message from a woman in Georgia.

People started tagging possible persons that were in the photo. Eventually, one of Salazar’s acquaintance on Facebook reached out and said, he thought he knew the woman in the photo. The friend shared Salazar’s phone number with the woman and the search was over.

“People started tagging, ‘I think this is this person, I think this is that person,’” Salazar said. “And then, an acquaintance of mine, on Facebook said, ‘hey I am 99 percent sure I know who that girl,’ so I asked him to send her my number and sure enough they called me.”

Other people tagged her name as well. Because the post was shared and viewed by thousands, the search only took three to four hours, Salazar said.

The newly engaged woman is Jessica Wic, and her fiancé is Clay Cleveland. Since the connection has been made, Salazar shared the photo with the couple and Jessica made the photo her Facebook profile picture.

Salazar said the couple was very excited when they received the photo.

“You could tell they were happy and smiling,” Salazar said, describing the phone conversation.

“I could have done a better job,” Salazar said. “If I knew what was going on, but I made do with what I had.”

Salazar said he was not expecting this. He was not looking to gain publicity or a job.

“I just wanted to get the photo to them and give them the printing rights,” Salazar said.

And he did just that.