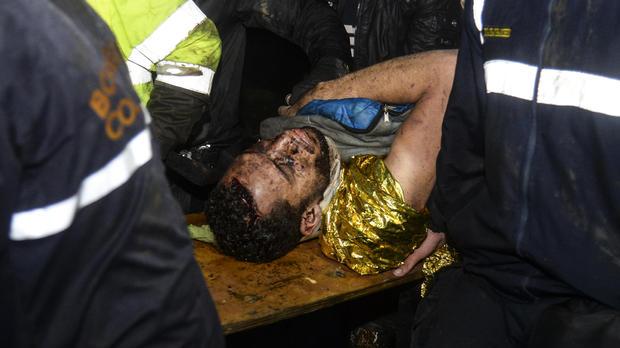 (CBSNews) -- One of only three soccer players on board the doomed Chapecoense chartered flight that crashed in Colombia, killing 71 of 77 of those on the flight, still doesn’t know what happened to his teammates and coaches, according to reports.

Defender Helio Neto was famously photographed being pulled alive from the twisted wreckage, a miraculous bit of good news amid the enormous tragedy that has shaken all of Brazilian soccer culture.

Colombian TV network RCN reports Neto spent nine days in a drug-induced coma and on a ventilator. He came out of the coma and off the ventilator on Friday. Medical officials said the very first question that he asked was how the big game they were traveling to had gone.

After a Cinderella season, Chapecoense were scheduled the day after the crash to play for the first time in the Copa Sudamericana final, as near the top of world’s soccer pyramid for trophies as most of the itinerate players - and its coach - were likely to reach. Their opponent, Atletico Nacional of Medellin, asked the South American Football Confederation after the tragedy to award the trophy to Chapecoense, which they did.

Officials said that after asking whether they won, Neto asked why he was in the hospital, and what exactly had happened.

After consulting with psychologists, doctors decided not to tell him for the time being about the fate of his teammates.

Doctor Carlos Mendonca reportedly told Brazilian station TV Globo: “It’s a recommendation from the psychologist not to tell him [on the plane crash] just yet to avoid any emotional shock that would be potentially damaging for his clinical recovery at this moment. So we should follow this qualified opinion for now.”

Another survivor of the crash said Sunday that the pilot never told passengers to fasten their seatbelt before the aircraft smashed into a hillside.

“At no point did someone from the cabin or the crew tell us, ‘Put on your seatbelts,’” said Henzel. “We just kept flying without any idea of what was about to happen.”

The plane took off from Santa Cruz, Bolivia and crashed near the airport in Medellin, Colombia on Nov. 28. The dead included 19 members of the Chapecoense soccer club from southern Brazil and 20 of the journalists covering the team. The survivors were two Bolivian crew members and four Brazilians - Henzel and three soccer players.

Investigations have been launched in Brazil, Bolivia and Colombia. Colombian authorities have said they believe a lack of fuel caused the crash.

Henzel said that toward the end of the flight, passengers around him began asking how long it would be before they landed.

“Ten minutes,” was the response from the crew, he said. “Then suddenly, the lights went off and the engines went off.”

At that point, everyone rushed back to their seats and fastened their seatbelts, said Henzel. Then the plane crashed into a hillside.

Henzel said when he awoke, there were emergency workers around him and he was in immense pain from what turned out to be seven broken ribs. He called out to the colleagues who had been sitting on each side of him, but they had died.

He said he believed he survived thanks to a miracle and the good fortune to wake up just as emergency workers passed by.

Henzel said he was sickened to learn the cause of the accident was likely a lack of fuel.

“People died because of a lack of judgment,” he said. “That is revolting.”