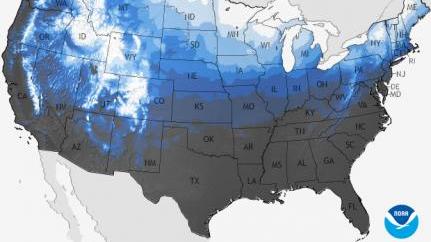 Christmas just doesn't seem the same without snow on the ground and in Wisconsin it is something we've come to appreciate and take for granted. Last year we did not have a white Christmas. In 2013 1.5" of snow fell in Milwaukee when the snow depth was 10".

According to NOAA, on average, southeast Wisconsin has over a 60% chance of having a white Christmas.

But this year, thanks in part to a strong El Nino, our chances of a white Christmas are dwindling. The National Weather Service is predicting a much above average December, in fact the temperature anomaly looks so strong there is a 70% chance that temperatures during the month we stay above average.

When it comes to precipitation, at this point there are equal chances of seeing above or below average precipitation in Wisconsin. But, with above average temperatures it is likely that most of that precipitation will fall as rain instead of snow.

We still have 25 days to the Christmas holiday so there is still plenty of time to dream for a white Christmas!