Cell on Wheels aims to deter youth from life of crime 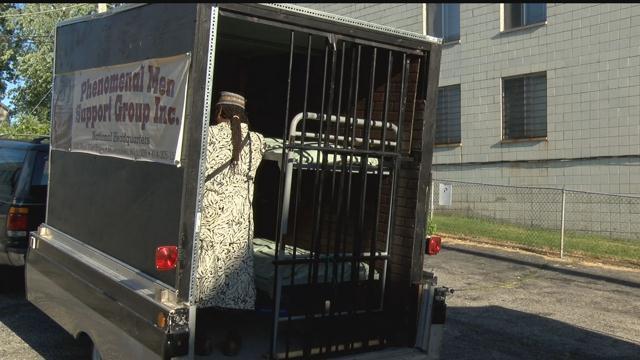 In the back of a trailer, is a jail cell.

\"Ain't nothing cool about going up in here,\" said Johnson Smith, former inmate.

The bunk beds, with lumpy mattresses, and toilet come from an actual prison, donated by the Milwaukee County Sheriff's Office.

Smith should know. He lived inside one for three years, caught for selling drugs.

\"From the time you go in here, and they take your name away, they give you a number, that's what you respond to,\" he said.

Smith is president of the Phenomenal Men's Support Group. He and fellow members take a mobile jail cell to neighborhoods across the city, showing youth, two at a time, there's nothing cool about life behind bars.

\"If you bring something back from the cafeteria and want to keep it cold, we explained to them you have to keep it cold in the toilet stool,\" said Smith.

Smith said he feels partly responsible for the rise in criminal behavior among young people.

\"The negative part, I played in the community, I realize some young man was out there watching me in the neighborhood on the block,\" he said.

Now he's on the block, as proof, that there's another way to live. His group is urging kids to think about the consequences of street life before they act.

\"Either a Milwaukee outfit, male or female or the graduation gown,\" he said. \"You do have a choice in this.\"

The Phenomenal Men's Support Group provides more than just the Cell on Wheels to change criminal lifestyles. They also serve as mentors for youth who need someone to whom they can relate.