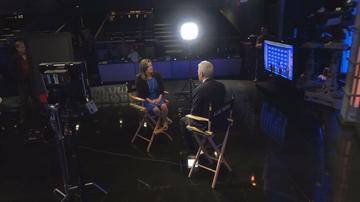 CULVER CITY, CA-Jeopardy is marking 30 years of Alex Trebek as host with a special Battle of the Decades.

CBS 58 News traveled to the Jeopardy Studios when it learned that West Allis Champion Michael Falk would be competing.

But Anchor Michele McCormack and Photojournalist Traci Neuman were surprised by the unlimited access they received.

\"They let us hang out the whole day,\" McCormack recalls. \"We had to sign a confidentiality contract and the actual shows that will air we couldn't record, but everything else was fair game and fortunately that included some time with Alex.\"

McCormack was surprised by his candor, even when talking about a that now famous Saturday Night Life comedic spoof and recent reports that the show is actively looking for his replacement.

Trebek says nothing has shocked him over the years but he has noticed that more women are winning.

\"That's a good thing,\" Trebek shared, \"I think in the beginning women were intimidated. Until they saw other women missing and said to themselves I could play like her.\"

Trebek has seen the SNL spoofs of him by Comedian Will Ferrell and calls them \"good fun.\"

\"I'm disappointed Mr. Ferrell has left television to play in movies that pay him $20 million  a pop. Who knows maybe he'll  host SNL one night and bring Jeopardy back. That would be great:\"

Trebek admits to watching this season because he's feeling his age.

\"I want to see how I come off on the air. I'm pleasantly surprised, knock on wood, my mistakes are not a prominent as I thought they were.\"

\"My body's wearing out. Between every break in taping I'm getting another operation. So I'm looking  more to the end than towards the beginning of a career.\"