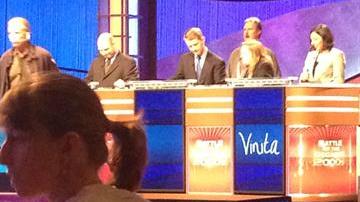 Johnny Gilbert: \"This is Jeopardy, Battle of the Decades.\"

You'd recognize that voice anywhere, but ever wonder what  Johnny  Gilbert the voice of Jeopardy looks like?

Gilbert announcing: \"We know after all these years folks that you love playing at home out loud.\"

And it's  only when you get a look behind the scenes that you learn there's so much more to his job.

Gilbert again:\"I'm going to ask you to monitor yourselves not to say anything out loud.\"

He's there to prime the crowd and lay down the law so they can churn out five shows a day,  46 days a year and 230 shows per season.

(Michele stand up)There you have the stage the set of Jeopardy that we all see on television. But come one over here and this is the part you rarely see. Probably the most important part of the show. The judge's table...where they make the decision if they have to stop taping the show to give a second look at a contestant's answer

(Michele question) I see here you have a dictionary, an atlas are you really using these during a show?

Billy Wise, Head Writer: \"We use them during the show for a very quick reference. Most of it is done online. Or occasionally we'll call a specialist of something like that or look in the good old encyclopedia. But most of it is Google that.\"

(Michele track) Our time on set was broken up in 15 minutes spurts, allowed to record rehearsals..

Floor Director: \"So when you walk over to talk with Alex..\"

(Michele track) ..we were shuttled to the snack table and green room while real shows we being recorded.

(Michele stand up) Oh it's a nice place to chill and relax if you're not on the show, contestants have their own green room but it's locked tight .They're reminded; don't talk about what happens on Jeopardy. Conversation might be overheard.

Michael Falk, West Allis Champion: \"There are no mind games going on. We're just hanging out having a good time in there.\"

(Michele track) If you hang out long enough you'll run into folks who have no problem sharing a few secrets, like West Allis Champion Michael Falk.

Michael Falk: \"I found out in the green room that a lot of people don't buzz with the hand that is their dominant hand. I do.  I look at the board,I read along with the clue and when Alex gets to the end those lights around the board go off.  And you go, I time it. Then I click several times. I figured it five or six times.\"

But what is the key to making it onto the stage? Clearing a written test to win an audition.

(Michele track) And what about clearing that audition?

Harry Friedman Executive Producer: \"We want someone who's smart, who's aggressive, who has a strategy.\"

And when it comes to strategy, champion Ken Jennings gave me the scoop on scoring a long interview with host Alex Trebek.

Michele McCormack \"Is there any one thing that really ticks off Alex Trebek?\"

Ken Jennings, Jeopardy Champion: \"Everything does. He's a nice guy off camera, but when he's standing at that desk don't mess with Alex.\"

(Michele track) I'll  find out for myself tomorrow at ten.