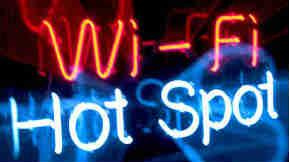 It's a perk alright at you're the coffee shop, hotel or even medical waiting rooms; free Wi-fi.

But Milwaukee based security specialist Paul Hager says be careful. The very devices created to help people like him secure corporate computer communications are now being used by crooks to steal people's user names and passwords while using free Wi-Fi.

The scam is called \"man in the middle.\"

The thief sets up an unsecured free Wi-Fi account that looks a lot like a legitimate one set up by a local business. The big red flag is that no password is required. It's aimed at making it easier for people in a rush to check their emails to go the path of least resistance.

\"You don't know the difference,\" explained Hager, \"You connected to the one that was easiest. But really there's a computer between you and the internet watching everything your doing.\"

With the permission of the Sherman Perk neighborhood, Hager set up an experiment and a customer was willing to participate.

The customer named Gregory went onto the scam Wi-Fi set up by Hager.

Within minutes a treasure trove of information was intercepted.

\"Even with what little data we have now we'd be able to potentially get into his computer,\" Hager told CBS 58's Michele McCormack.

McCormack then approached Gregory with their findings, including the name of his computer.

\"I knew you could get that,\" replied Gregory who's confident in the security software he has installed in personal computer.

When we asked him to do the same with his i-phone and randomly pick a celebrity to Google, Gregory was shocked at how instantly and from across the room, Hager knew exactly what he was doing.

So how do you protect yourself?

Never use free Wi-Fi that doesn't require a password.

Call your iphone and other mobile devices a name that will not give a clue to your identity.

Never conduct financial transactions on free Wi-Fi, not even when taking a closer look at a coupon that was emailed to you for an online sale.

\"Keep it to browsing local news and sports,\" suggests Hager.

That includes not logging onto your fantasy football or baseball league. That's because most people don't use different user names and passwords and it's just a matter of time before a criminal could figure out the same words would work with your bank account.

In our special report, CBS 58 News left out some of the steps used by Hager for the experiment because our goal is to inform the public, not help the crook.