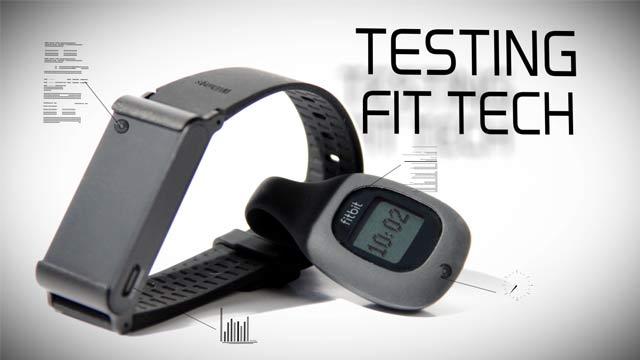 Slimming down is a goal for many, and the tech industry aims to cash in on that desire by selling consumers small fitness tracking devices.

According to a recent Gallup Poll, published in July, almost half of Americans -- some 45 percent -- worry about their weight \"all\" or \"some of the time.\" That is a substantial increase from the 34 percent who showed that same level of concern back in 1990.

\"For me, after I had my kids, it was just that I needed to come and do something,\" Elise Dieringer shared of her own personal fitness journey. \"Your body doesn't bounce back like it used to.\"

Dieringer's story is a common one. She is busy, holding down her job as a nurse and taking care of her family. Her desire to lose weight, some 50 pounds, began with a revelation.

\"I saw a picture of myself, and I thought that's not what I used to look like before I had kids,\" Dieringer said. \"So it was time to make a change.\"

Of course men can also relate, though for different reasons than child birth. Many blame technology for a sedentary lifestyle. However the tech industry just might have an answer to help motivate us to lose those unwanted pounds. Wearable fitness devices are gaining in popularity, and have already been identified as one of the hottest gift item segments for the holidays. The fitness professionals CBS 58 spoke with at the Gold's Gym location in Waukesha say they are a great tool for anyone looking to make a change for the better. They have been using a similar device called the ExerSpy for some time now.

Waukesha Gold's Gym general manager Tim Ahner said, \"We try to encourage engagement in fitness goals. And if that helps you do that, we're all for it. No matter what the device is.\"

In this new era of smartphones, that are capable of monitoring your physical activity and pairing with apps, it comes as no surprise our obsession with weight and desire to lose the love handles have merged with technology.

\"Everyone struggles with the same thing,\" Ahner explained. That's being consistent. You know life gets in the way.

\"What you really want to do is focus on your workout or your recreational time. Devices like this keep you focused, keep you motivated. For a guy or a girl who's already in shape, this will help you get to the next level.\"

Gold's personal training director Mark Vannucci says the new line of products make a lot of sense in the fitness world whether you go to the gym and work out with him or just want to get a little more active on your own.

\"It's all about people knowing what they're doing at that time of the day,\" Vannucci said. \"It's so much convenience.\"

Because of that convenience, the wearable fitness industry is booming. You can use the display on the small devices to track your progress. However you get even more useful information from the apps that take all the data collected from the device, plus what you enter in on your own, and put it right at your fingertips to aid you in your quest to lose those excess pounds.

CBS 58 purchased four devices that rate high among product testers, and retail between 50 to 120 dollars. We asked Elise Dieringer and Corey Nelson, a fitness professional in training at Gold's Gym, to tell us how helpful they really are. Dieringer tried two devices from one of the leading names in the industry. She used the tiny FitBit \"Zip\" and the slightly larger FitBit \"One.\" She was quick to point out how simple they were to use.

Dieringer shared that she liked how easy it was to conceal the little \"Zip\" at work with her professional attire, instead of wearing a band or sports watch type of accessory. The FitBit \"One\" is a bit larger. It also adds a sleep monitor function that detects how restful your sleep is. However that feature did not hold much interest for her.

\"No night is a good night's sleep for me,\" Dieringer simply stated. \"But I would imagine for someone who does get enough sleep, or can get enough sleep, it would be helpful. Because it's like, 'oh I feel kind of yucky today, why am I feel that way?'\"

On the flip side, Nelson used the Pulse O2 from Withings that also has a sleep monitor function.

\"I've never kept track of how many hours I've slept during the night,\" Nelson confessed. \"But with this little contraption, it's really simple. Just hit a button and, 'oh I slept seven hours last night.'\"

Nelson gave a glowing review of the Pulse O2. He also loved the style of the band it comes with, though it comes with a clip too.

Nelson tried out the iHealth Activity and Sleep Tracker for us as well.

\"I didn't really like it as much as the other one,\" admitted Nelson. \"This one is a little less stylish, I think. And [it is] a little bigger, more cumbersome on your wrist. But overall I think it did the job.\"

Recently, we also caught up some folks who were exercising along the lakefront in Milwaukee. One woman, who uses a FitBit product, says it's all about whatever gets you up and moving.

\"It just depends on where you get your motivation from,\" Alex Hetzer said. \"But if your someone that needs a little extra kick like I do, it's really nice.\"

Not everyone is a fan of the devices though.

\"I think it's less stressful,\" said Andrew Smith. \"You know, just do your workout and not have to worry about hitting numbers.\"

Whether you use an app to just keep track of the foods you eat or you use a fitness tracking device, experts agree that you are more likely to lose weight if you just do something to get your self engaged in the weight loss effort.

According to a recent report from Price Waterhouse Coopers, about 20 percent of Americans already own a wearable fitness device. That's right on par with where tablets stood in 20-12.

The research firm International Data Corporation found that 19-million devices were shipped for this year -- triple the amount from 2013. IDC forecasts the wearable market will swell to nearly 112-million devices.

As far as recommendations... The FitBit \"Zip\" is a great entry level choice. However that one does not have the sleep tracking function. For those who are are fairly athletic, the Withings \"Pulse Oh-Two\" is a great way to go. It can measure your blood-oxygen level, which is ideal for those who want to participate in elevation training.

If thinking about purchasing a FitBit device, keep in mind the products from that company do not integrate with Apple's new \"Health Kit\" system that was rolled out with the latest IOS update. However their apps do work with Apple Devices as well as with Android. All of the products we tested work with apps for Android and IOS devices.