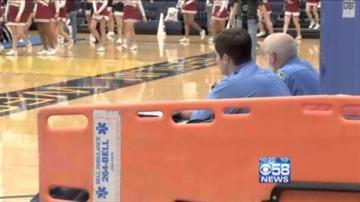 NEW BERLIN-CBS 58 News was recently granted access to one of the most coveted cheer leading competitions recently, to get to the bottom line about reports that cheerleading posed high risk of injury.

CBS 58's Michele McCormack spent the days with some of the best and watched their skill, some mishaps, but also some important decisions these young women faced during the course of practice and competition.

New research has been making the rounds in the medical community which concludes that 65% of catastrophic injuries to female athletes are from cheerleading.

\"We work so hard and.we put in a lot of effort,\" Mckenna Applin of the  Greendale Varsity Cheer team told CBS 58's Michele McCormack. \"We run, we do conditioning. So, we do what the other sports do we just don't get the title of it.\"

Many on her team acknowledged having suffered a concussion. Cheerleaders are especially susceptible because they don't wear protective head gear.

An analysis of injuries shows it's the young women at the base who support the pyramids who are at the greatest risk.

The National National High School Athletic Association issued a mandate requiring medical clearance for any student to return to the action after being pulled because of a head injury. A mandate that is voluntary for most cheer squads.

Considering cheerleaders are highly competitive, the challenge is will the young participants admit they're hurt if it means they are pulled from participating.

CBS 58 News witnessed first hand as a local team faced such a test.

During practice, one of the girls at the base of a pyramid for the Kettle Moraine Junior Lasers was hit in the head. Her nose began to bleed. It was just minutes before they were scheduled to perform.

Lisa Zimmerman is her mother and the team's coach. \"She didn't feel that she was strong enough or steady enough. And if she went out without being 100% the whole stunt could fall and others could get hurt. So it's her call.\"

In the end the Junior Lasers competed without their teammate.

John Browning of Bell Ambulance was assigned to the competition and kept a clear line of sight on all the competitors. He tells CBS 58 that the bloody nose to Kettle Moraine was the worst injury of the day.

\"I think it's pretty incredible.The potential for injury is pretty high.\" Browning remarked. \"It's pretty amazing that there aren't more injuries considering what they do. It must be good training.\"