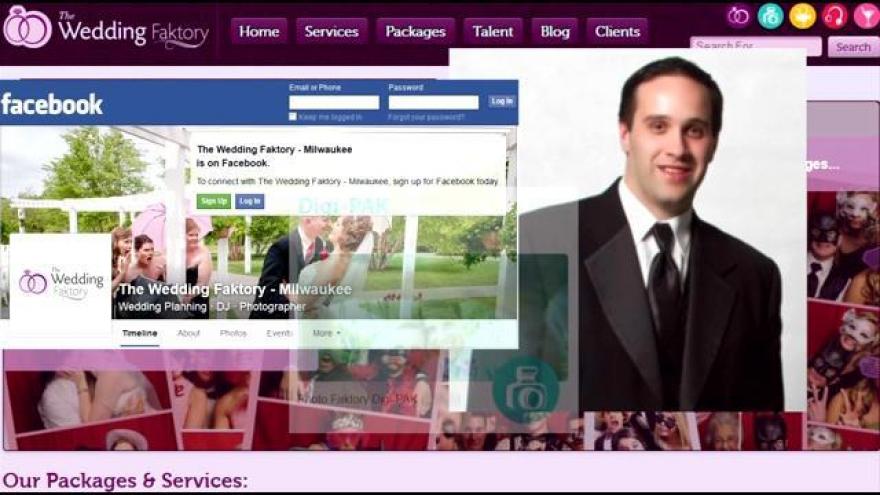 Imagine hiring a company for your wedding photos, you pay, but after the wedding you're out the cash and you never get your photos.

They planned to show loved ones, but the frames on heather and Eric Kirch's mantel are still empty.

"The guy got back to me real fast I ordered a package the digit pack for $1100 I got a discount."

The Kirch's signed a contract with the 'Wedding Faktory' wrote a check, and a photographer did show up at the August wedding. The Kirches say what didn't show up were the photos after the wedding and they say communication with Pechacek trickled to a halt.

Kirch says, "We started not getting any responses back no response to emails or voice-mails or anything."

The Kirch's say they tracked down their photographer online, "He said yeah I was the photographer I had a great time and yeah I haven't been paid yet."

In December of last year, the Kirch's say they finally got this email from Pechacek admitting "I'm having trouble paying the photographer."

Now in May, they still have no wedding photos. Another couple had a similar experience.

Derry says, "He didn't pay the photographer so we don't have any wedding pictures."

Melissa and Troy Derry say they also paid $1,400 to Pechacek after signing. But after her photos didn't show, she also looked up her photographer.

"When we reached out, Taylor recommended to her that she would get the payment from me again even though I already paid him in full."

The Wedding Faktory's website had the BBB's logo for an accredited business when we looked it up two weeks ago. The BBB says that's not the case.

The BBB demanded that the Wedding Faktory remove the BBB logo from its website, and as of April 30th, it no longer appears on the site.

"It's an unauthorized use of our trademark and that's against the law."

Court records show Pechacek requested amortization of his debts in 2014 and 2015. Both court cases are over. We brought these issues to the man himself.

We found Pechacek at home watching TV. After asking us to leave he later called us on the phone.

"I've had trouble paying the photographers that did them."

Pechacek then promised to get the Kirch's and Derry's their photos in the next three weeks.

Derry says Pechacek did finally contact her, and offered a discount if she did this..."To sign another contract say that I could not put any negative press on the news online and anything that I put on I had to retract."

While both women say they still want their photos, they say they also want to make other women aware.

Kirch says, "I don't want anyone to go through this."

Derry says, "You think somebody that works in the wedding business they want to make people happy not make it will go through all of this."

We offered Pechacek multiple opportunities to sit down with us on camera, he says he's trying to make the situation right, the women still don't have their photos.