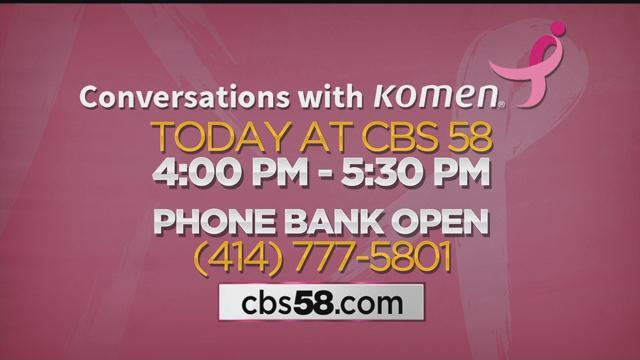 Our sister station Telemundo Wisconsin also broadcast live to reach out to our Spanish speaking viewers.

Anyone with questions about breast health and breast cancer was invited to call the phone bank between 4 and 5:30.

Experts with "Susan G. Komen" will be on hand to answer any question or concerns.

Susan G. Komen® Southeast Wisconsin began with a Race for the Cure event in 1999 organized by a group of dedicated breast cancer survivors, breast health professionals, and other women of vision. In those days, a small core of committed women kept files in their homes and cars, had all Race phone calls on an answering machine and treated Komen as their second job. It was truly a grassroots effort.

The need for management grew increasingly evident over the years. Thus, the first Board of Directors was formed and an office was generously donated in early 2000. Today, Komen Southeast Wisconsin serves 7 counties and has a staff of five while continuing to have nearly 150+ active volunteers serving on various committees. The annual Race for the Cure has grown to be the largest nonprofit run/walk in the Southeast Wisconsin community with 18,000 to 20,000 in attendance annually.

With the help of passionate volunteers, a dedicated board and staff members, Komen Southeast Wisconsin has raised more than $9.2 million to support breast cancer education, screening and treatment as well as more than $3 million to the most promising breast cancer research programs. During this time more than $6.7 million in research grants have come back to either the Medical College of Wisconsin or the University of Wisconsin.

Several of the volunteers from the phone bank were from Kohl's Cares which has a partnership with Komen to get residents of SE Wisconsin the help they need.

The idea was to create an educational session where women can talk openly about breast cancer and the potential impact it can have on their lives.

The goal of these sessions is to encourage women to get regular breast health screenings, thereby increasing survival rates throughout Southeast Wisconsin.

A ribbon creates awareness but it can’t cure breast cancer. If you want to truly make a difference, it takes action.