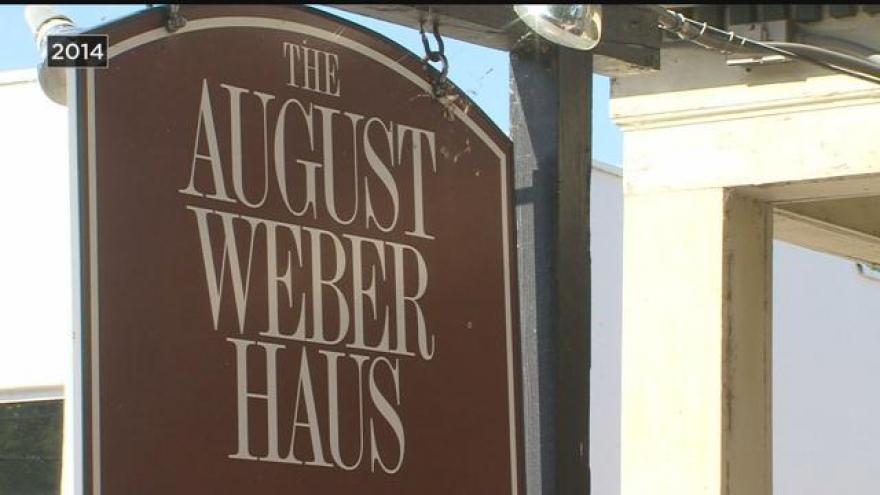 CBS 58-- A group of Cedarburg residents wants the city to revoke the liquor license for August Weber Haus.

The restaurant is no stranger to controversy. Back in 2014 police began investigating the owners' son, Jacob Banas, who worked as a bartender at the time. Multiple women accused him of drugging their drinks and sexually assaulting them. While the case is still open, no charges have been filed. Jacob Banas has since filed a lawsuit against at least one of his accusers.

A complaint filed with the city on Thursday says August Weber Haus is violating a new city ordinance. Several people told us when the restaurant claimed to be open they went in, and asked for a menu, but were told food wasn't available and in some cases owners called police.

The sign on the door at August Weber Haus says to watch Facebook for hours so CBS 58 did, and when they posted they were open just after 6 one morning, we stopped by.

“Yeah, just for like coffee, tea,“ Diane Banas, one of the owners said. “If you want a bloody Mary we can do that.”

Online August Weber Haus calls itself a beer, wine and liquor establishment that serves lunch and dinner. When CBS 58 asked if they were serving food, Banas said no.

“Not this time of year,” Banas said. “It's just not busy enough for us.”

But the restaurant opens in order to comply with a city ordinance, which was passed in December, despite objections from the Banas' attorney.

The new rules require restaurants with a Class B liquor license to be open for at least four hours a day, 15 days a month.

August Weber Haus wants to keep its license so it can serve at festivals.

“Mainly we do things like when the festivals and things are on,” Banas said.

August Weber Haus does not have set hours. Instead it posts on its Facebook page when it opens and closes, though outside of festivals, it rarely serves food.

“Mhmm but we have to be open so many days a month so you know, we open during the week,” Banas said.

The Committee for a Safe Cedarburg, a group of concerned residents, filed a complaint with the city Thursday, calling for the restaurant to lose its liquor license.

“It just kind hurts the whole town and city that they aren't open normal hours for business,” said Dan Swarthout, a member of the Committee for a Safe Cedarburg.

The group says it's not only about the assault allegations against Jacob Banas, which he has not been charged for, but it's also about the restaurant not utilizing its license.

According to city council meeting records-the last available class B Liquor license was handed out in November and there are other businesses that want them.

"And Mayor Kinzel agreed that liquor licenses are needed and they are limited. He met with two separate businesses recently that want to open a business and want a liquor license,” the council meeting minutes read.

In the complaint, the safe Cedarburg group claims the restaurant is not open the required number of hours, and lists times they believe the restaurant said it was open but was not. On January 5, 2017 the group says August Weber Haus posted it was open from noon to four, but at "12:12 the interior lights were off and the open sign was not illuminated."

Aside from the hours of operation requirement, the ordinance defines "being open" as "any member of the public is able to enter the licensed premises and engage in the licensee's principal activity or activities." August Weber Haus advertises it serves lunch and dinner, but Facebook shows it typically closes before dinner time.

And the safe Cedarburg group alleges employees act in a way that seemed to "intimidate and/or prevent members of the public from entering the licensed premises."

“They called the police on a number of different people that I know in the community that have gone in,” said Patrick Manner, who wants the city to review the business’ liquor license.

Patrick Manner says when he went in, Diane Banas took his picture, and when he asked for a menu, he says Banas told him they were only serving a fruit and cheese plate.

“And she held up the phone again to take my picture,” Manner said. “And I said ‘listen, I asked you not to do that.’”

Manner left, and it was Banas who called police. In fact she's reported multiple people for entering the business and asking for a menu

According to one police report officers "asked Banas why a group of people coming and asking for a menu to insure she is operating within city ordinance is threatening. She stated, ‘if you feel you're being stalked it is threatening.’"

Pam Easey says she pulled up to the restaurant and before she could get out of her car, a woman came outside.

“I rolled down the window and I asked her if they were open,” Easey said. “The open light was on. And she didn't answer me but she started taking pictures.”

At Winterfest this past weekend, the safe Cedarburg group held up signs and handed out fliers about the issues surrounding August Weber Haus.

“We're here to educate the public about the multiple allegations,” said Antonio Ramirez, a member of the Safe Cedarburg group. “I'm worried about people who are not from Cedarburg and don't know anything about the business.”

An attorney for the Banas' sent a letter to the police chief earlier this month, asking that officers to monitor the safe Cedarburg group and claims members are harassing the business. However no citations have been issued to people who've gone inside.

According to their Facebook page, August Weber Haus was open 15 day this month and has not opened since.

We did ask If they wanted to do an interview. They declined.

The city also declined to comment, but prior to passing the ordinance, the city attorney told the city council the measure was in the works for months and was not targeting any particular business.

The city clerk confirms they received the complaint from the Committee for a Safe Cedarburg.?