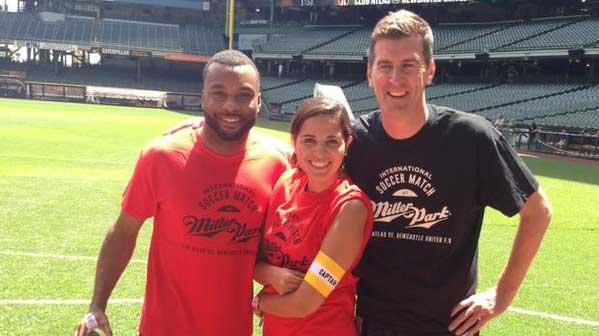 Before the pros play, the amateurs took the pitch.

The Milwaukee Brewers invited the media to play a \"friendly\" one day ahead of a big soccer exhibition at Miller Park, and CBS 58's Bill Walsh, Earl Arms and Sandra Torres answered the call.

Flashing none of the skill and athleticism that Newcastle and Club Atlas will display a day later, Bill Walsh's \"Newcastle\" squad bested the \"Club Atlas\" side featuring Earl Arms and Sandra Torres-- final score 6-5 (2-1 in penalty kicks). Arms tallied one of the best goals of the match, booting one in from long range, and Torres was team captain and a stalwart on defense. Walsh scored in the first half, and also saved two out of three penalty kicks in goal during the penalty shootout to help his team to a win.

Miller Park is hosting a friendly between Atlas Futbol Club from the Mexican Liga MX and Newcastle Football Club of the English Premier League on Tuesday, July 14.  It is the second-ever professional soccer match at Miller Park and follows the success of last year's exhibition between Chivas and Swansea City A.F.C.