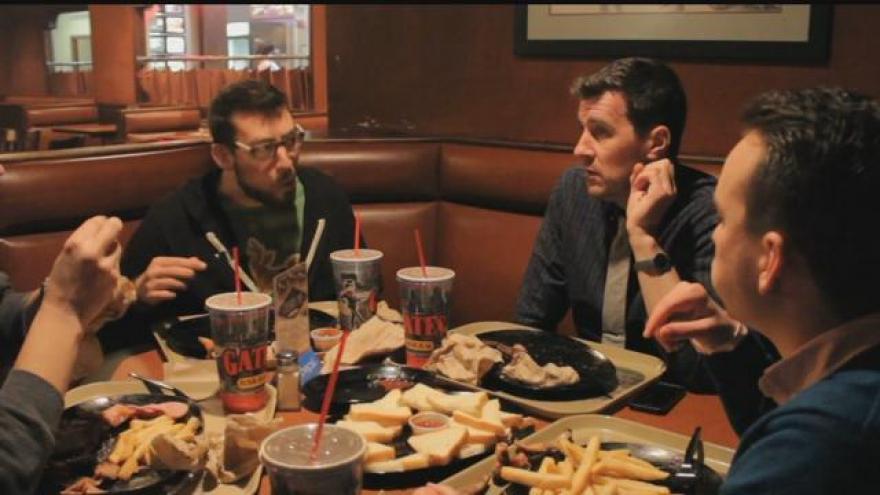 The CBS 58 Road Trip crew discovered that Kansas City has a gorgeous skyline, but KC is probably more famous for barbeque so the CBS 58 Big Road Trip Crew went searching for the best BBQ in town.

Driving across Missouri, touring Arrowhead Stadium and playing some parking lot football all led to four empty road trip bellies. The team needed barbeque and only had 12 hours in Kansas City so we only had one shot to get it right. In order to find out which was the best place to go we needed advice from the locals. Gates, Jack Stacks, Oklahoma Joes were all mentioned, but what makes good barbeque depends on who you ask. Sauce and quantity were the most common reasons behind a good recommendation.

It was a close call, but the CBS 58 Big Road Trip non-scientific poll said go to Gates Bar.B.Q so the team did.

The crew was greeted with shouts of, "Hi, may I help you?". And four combination plates later, the team was in business! Ribs, brisket, ham, fries and bread all smothered in a tangy, smokey, sweet barbeque sauce! Delicious!

The team left happy and full, but wished they had more time in Kansas City to enjoy the other recommended spots.

Next up, the state of Kansas and a look into the background of one of Wisconsin's favorite Packers - Jordy Nelson.