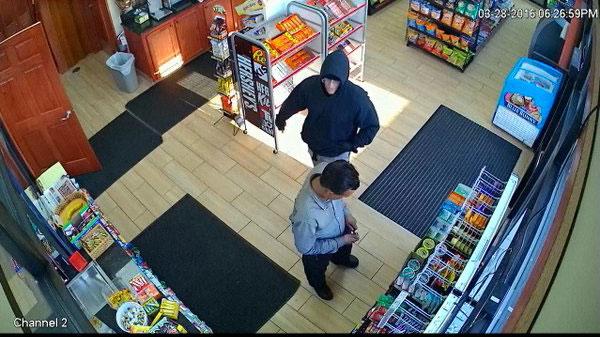 At Bender and North Port Washington roads in Glendale, it was a normal Monday at the Citgo Gas station.

Inside, surveillance video shows the clerk organizing a display by the front door.

Little did he know, he'd be violently interrupted by a man, walking through the parking lot in a black-hooded sweatshirt and tan pants.

"Just having the weapon exposed, going in right away is dangerous enough," said Dhein. "Obviously, he's not afraid to use it."

"He came from behind and put a knife behind me," said store clerk Suvrat Tapuriah.

Cameras show the suspect putting the knife in the clerk's back and forcing him to the floor.

"Oh it messed me [up] like anything," he said. "I said 'just take anything, just don't let that go inside me at all.'"

He said the criminal demanded him to go behind the counter and open the register. But he resisted and told the suspect how to do it himself, fearful of what could happen if he walked back there.

"I'm not coming behind you because you have a knife and once I open the drawer, you're going to hurt me or anything," he said.

With the clerk's help, the robber opens the register and grabs all the cash. The clerk is already gone.
"I ran to the AT&T across the road," he said. "From there, I called the cops."

The clerk is back on the job, but Glendale officers said the threat is still out there too.

"Dangerous person," said Officer Dhein. "We want him off the street and hopefully the public can help us."

The suspect is described as a white man, thin build, about 5'7", with blonde hair.

Police urge those who know him to call North Shore Crime Stoppers at 962-HALT. Tipsters are eligible for a reward up to $1,000.