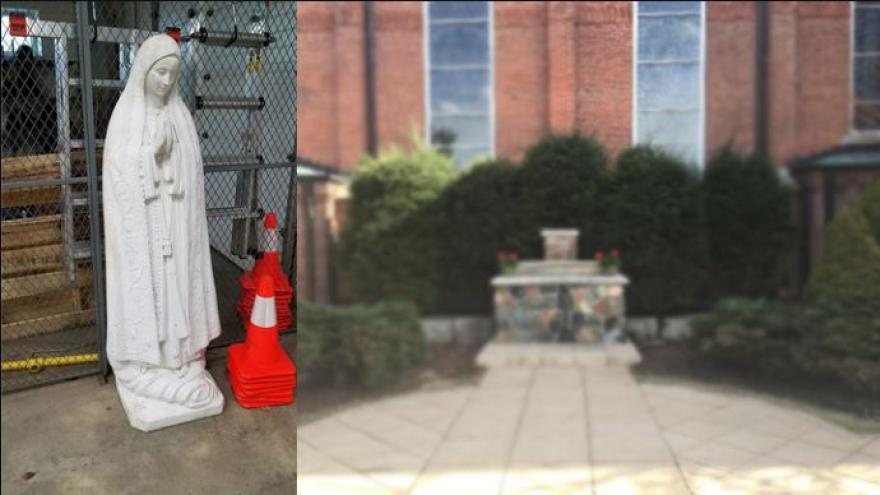 WAUSAU, Wis. (WSAW)- An official police report has revealed how the Wausau Police Department was able to catch the three people suspected of stealing the Virgin Mary statue from St. Mary’s Catholic Church.

According to the report, food left behind by the suspects eventually led to them being identified.

Police were able to figure out the food was corn dogs purchased from the Kwik Trip across the street.

When police realized that the corndogs left on the scene came from that gas station, they were able to watch surveillance footage from the gas station on Monday.

That's when they saw three people later identified as the suspects Brian Yonker, Miranda Lindner and Katie Kelly leave the Kwik Trip and walk in the direction of the church.

When the officer spoke to them, they admitted to stealing the statue and said the plan was to take it to a property in Pelican Lake and bury it.

The report says the three suspects were scared of getting caught after the media attention the theft was getting, that’s why they moved the statue out of Wausau.

The statue was recovered Monday evening from the Pelican Lakehouse and was returned to the church on Tuesday morning.

Father Aaron Huberfeld told police he does not want the three suspects to serve time in jail and wants them to be “referred for theft with a recommendation of deferred prosecution.” This means the three could get a pardon for the theft if they fulfill another requirement like community service.

Father Huberfeld says he has heard from all three suspects. "All of them have reached out to me and expressed their extreme sorrow for what they did and to make amends. And I believe them all to be sincere," Huberfeld said.

He says he got a good laugh when he found out that it was corn dogs that cracked the case.

"Reminds us that divine providence also has a sense of humor and we've all certainly had a good chuckle about that," Father Huberfeld said.