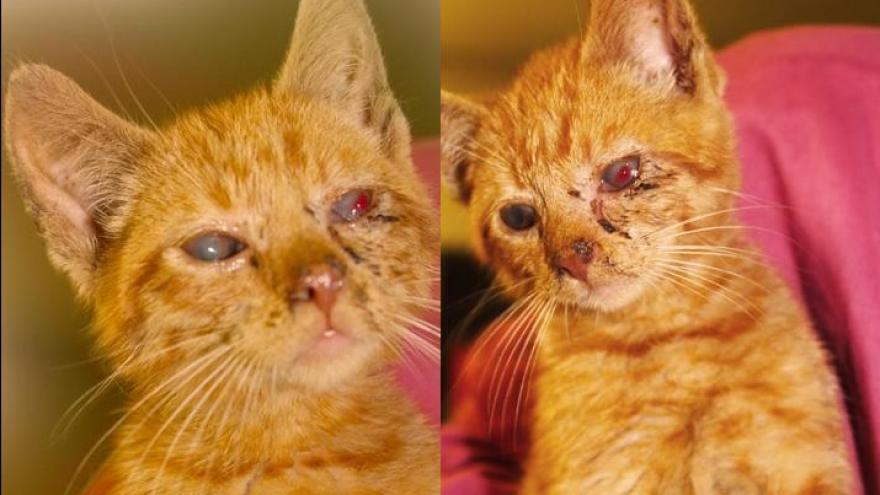 WASHINGTON COUNTY, Wis. (CBS 58) -- In a Facebook post on Wednesday the Washington County Humane Society posted about a cat who they have named Red Ernie that was found on the side of the road. Ernie was taken to the Jackson Police Department and an officer took the cat to his house at night and then brought him to the Humane Society in the morning.

Ernie was checked out by vets and has a number of issues including a cuterebra, which is a wound caused by a maggot burrowing under the skin. His eyes were completely shut due to an eye infection and he had a severe upper respiratory infection. The little guy was also suffering from anemia and was dehydrated.

Red Ernie also had coccidia, worms, and a nasty case of ear mites. A few days later his leg started swelling and x-rays showed that he had a double compound fracture. One of the fractures is right by the growth plate.

Red Ernie’s parasites are now under control, he is coccidia free, and the ear mites are gone. The Humane Society says he is gaining weight nicely and his respiratory infection is starting to clear up.

Unfortunately Red Ernie's eye infection will never get better. Due to the amount of pain and pressure Red Ernie has, veterinarians have recommended his eyes be removed. Because of the placement of the compound fracture, they also recommend his leg be amputated. He is currently receiving medication for the pain and as soon as he is healthy enough and able to handle anesthesia he will have his surgeries.

A family has already expressed interest in adopting Ernie once he is ready to go home, but the Humane Society will make sure he gets the best fit.