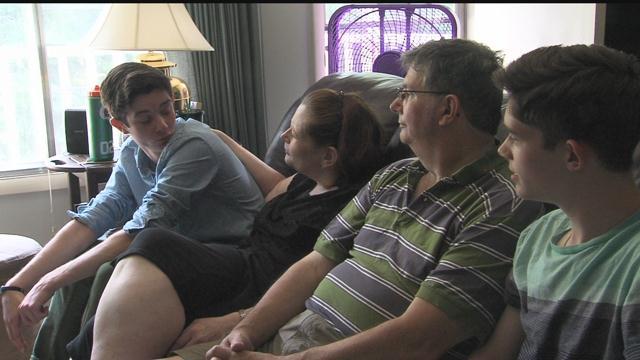 One week ago their car was stolen while their son was at church on a Sunday morning.
But it doesn't end there.

The O' Brien's already know about struggling. In January the family was shocked when Tim O'Brien was diagnosed with early onset Alzheimer's and mom Trish hasn't worked in five years due to health issues and losing their only car has just made matters worse.

June 5th is the O'Briens' wedding anniversary and this year to celebrate their 16 year old son AJ wanted to make them breakfast, so he wanted to get home from church  and fast.

"I literally walked into my parking space and it wasn't there--i just stood there in disbelief. And I was like where's my car?" AJ said.

Their Dodge Caravan, shared by the family of four was stolen.

"The car wasn't worth much to begin with, but it was ours and it got us places," said Trish.

Then found torched on Milwaukee's south side the next day.

"They think its a group of teenage boys between 12-17, and they stole six cars in two weeks," said Trish.

"You feel kinda feel defeated and beaten, like if there was an alarm you could have walked out and stopped it," said AJ.

"You can't live out here without a car, there's no public transportation," said Trish.

Especially important for Tim as his Alzheimer's progresses.

"I can't walk from one room to another and forget what I was going to get," said Tim.

He  was let go from his job due to complications from his illness and for him it was more than just another car.

"I love to drive. Someday it will go away," he said.

For now they're getting through the tough time with jokes.

"I think mini vans are the new Audi," said AJ.

And while leaning on family and friends for rides son Matt says they're also leaning a little more on each other.

"You learn things about your family. What people can take and what you can't take and we have to step in and support each other," he said.

A church member has been letting them borrow a car for the past week, but it's just a temporary fix.

If you'd like to help, here's a link to the family's Gofundme page: https://www.gofundme.com/o-brienscar