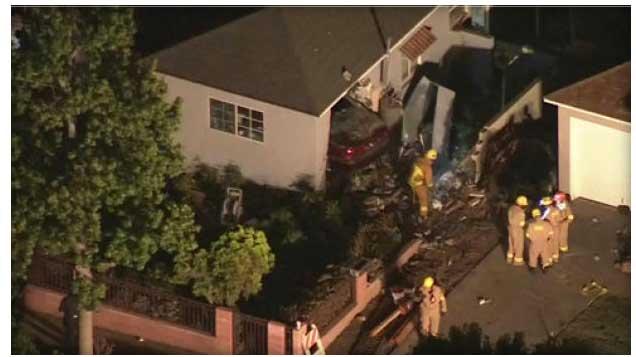 LOS ANGELES (CBS NEWS)-- A car plowed into the front of a Los Angeles house where a group of 11 mostly elderly people were holding a bible study and prayer meeting, leaving one person dead and eight injured, authorities said.

The red sedan left a gaping hole in the house in the Harbor Gateway neighborhood on Wednesday night and was almost entirely inside when it stopped.

The female driver ran from the scene and police are looking for her, but the car had no license plates and there was no identification inside, authorities said.

The car was speeding down the street and the woman apparently lost control, jumping the curb, slamming into the house and killing one person, police Capt. Leland Sands said.

Many of the victims were trapped by the car, and neighbors tried to lift it off them before firefighters arrived.

Firefighters said all of the victims ranged in age from 40s to 80s, CBS Los Angeles reports.

The injured victims were seven women and one man, and five of them were seriously hurt, city fire spokesman Brian Humphrey said. He had no further details on the injuries.