Canada Parliament shooting: How it unfolded 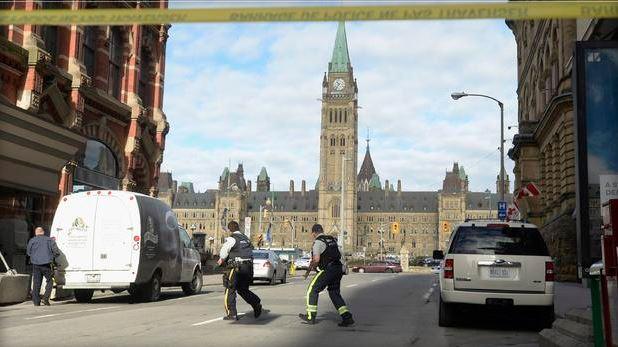 (CNN) -- Canadians feared this day, hoping it would never come but also knowing the odds probably weren't in their favor either.

Not in this era of senseless gun violence, home-grown jihadists, and terrorist organizations with international reach.

On Wednesday, a gunman opened fire in the heart of the Canadian capital, shattering a nation's sense of security.

Questions galore: What prompted the attack? Is there a link to terrorism?

Whatever the answers, one thing is clear: As one resident put it, \"Canada lost its innocence today.\"

This is how it unfolded.

Chaos in the nation's capital

It begins at the Canadian War Memorial

A blaze of gunfire erupts at the solemn Canadian War Memorial in Ottawa. Two soldiers are standing guard. One of them is gunned down.

\"I heard four shots,\" says Peter Henderson, a journalist. \"I turned around and ran and I saw one of those soldiers laying on the ground.\"

The shots sound like they come from a high-powered rifle, Henderson says. Other witnesses describe the shooter as a man with dark hair and a scarf on his head. They say he's carrying a \"huge rifle.\"

Strangers and emergency personnel rush to the soldier's aid as the gunman runs away. At least one witness says the shooter commandeers a car at gunpoint and leaves the scene.

The action quickly shifts to Parliament Hill, just a quarter mile away.

Witnesses report a gunman entering the main Parliament building through an entrance meant for government officials. He exchanges gunfire with security officers.

Canadian Prime Minister Stephen Harper is holding a meeting at the time. Harper is quickly escorted, along with some members of Parliament, to a safe location, but dozens of others remain inside on lock down. MPs and Parliament staff barricade themselves in rooms throughout the building.

Within minutes the shooting is over, according to Josh Wingrove, a reporter with \"The Globe and Mail\" newspaper who was at Parliament when it began. He sees a body outside the Library of Parliament.

Locked behind closed doors, government officials wait while police clear the building and make sure there are no other gunmen inside. They take to Twitter to keep friends and family posted on developments.

Sen. Jim Munson describes the harrowing experience. \"Everyone safe but shaken ... mp's say they could smell gunpowder,\" he tweets.

Although Wingrove sees a body in the hallway, it will be hours though before official word comes that the gunman is dead, killed by Sgt.-at-Arms Kevin Vickers.

Ottawa police don't know how many suspects they're are looking for. They tell CNN there may have been two or three shooters and the war memorial. Officers flood the area.

CBC reporter Chris Goldrick tells CNN that authorities believe there's another gunman at large and on the run.

There's word of yet another possible shooting, police say. This one is just a 7-minute walk from Parliament, near the city's Rideau Centre mall. That report is later dismissed.

The U.S. Embassy in Ottawa goes on lock down. President Barack Obama is briefed on the shooting and pledges Washington's support.

Minutes later, developments in Ottawa prompt NORAD -- the North American Aerospace Defense Command -- to its planes on higher alert. \"We stand with you,\" says a statement from Cmdr. Chuck Jacoby.

The FBI pledges to remain vigilant in the wake of recent chatter by ISIS about attacks on Western targets. The Canadian Embassy in Washington is also locked down.

News comes that that Canadian soldier who was shot at the war memorial has died. He's identified as Cpl. Nathan Cirillo, a reservist from Hamilton, Ontario.

Later in the day, Michael Zehaf-Bibeau is identified by Canadian officials to their American counterparts as the suspected gunman, multiple U.S. officials told CNN.

Bibeau, who was born in 1982, was a convert to Islam and had a history of drug use before he converted, two sources say.

His passport had been confiscated by Canadian authorities when they learned he planned to go fight overseas, a U.S. law enforcement official says. The official said it is not clear when that happened.

Canadian broadcaster CBC report that Bibeau had a record of drug arrests going back 10 years.

The end of the day

Wednesday closes with lots of uncertainty for the people of Canada, but especially for the residents of Ottawa. Are more attacks planned? Are there any other gunmen on the loose?

Still, there are signs of hope and goodwill.

In Pittsburgh, the CONSOL Energy Center is bathed in red and maple leaves as the Canadian national anthem play ahead of the NHL match between the Penguins and the Philadelphia Flyers.

Back in Ottawa, MP Rempel remind those who were shaken by the incident that not all is lost.

\"For those wondering, our nation's flag still proudly flew over parliament hill tonight. #CanadaStrong,\" she tweets.