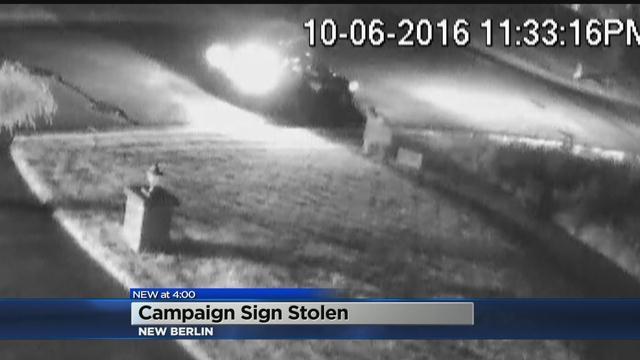 There's been another case of campaign vandalism in Southeast Wisconsin.

It happened late Thursday night in New Berlin and the theft of a Donald Trump sign was caught on surveillance cameras set up by the homeowner.

The video shows a caravan of cars full in front of the property.

Then, one person gets out of one of the cars, snatches the sign, and then all the cars drive away.

Homeowner, Nike Clark, says it's about more than just the theft.

Clark, who is also president of the Wisconsin Carry gun rights group says it's become alright to pick on republicans and deface their property.

"It's just the intolerance of young people these days," Clark told CBS 58 News. "From celebrities in media to the late night comedy shows cracking jokes, there's justification for doing that to a Trump sign."

Clark says he's heard from social media that this has been happening to several people.

He also says police have identified at least some of the people involved in the theft from his property.

The detective assigned to the case was not available for comment.

Back on October 4th, CBS 58 News reported on vandalism of campaign signs in Walworth County.

Democrats were especially upset given the fact that the vandals had cut out the eyes on some of the photos of local candidates.

As we've heard before, while there is an expense involved, the victims are most upset that political discourse falls to the level of vandalism and theft.