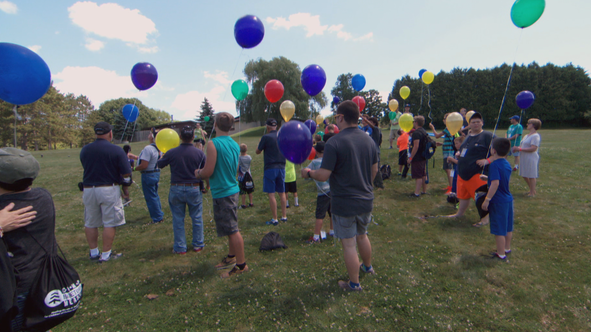 MILWAUKEE -- Outside Milwaukee, Wisconsin, there's a kids camp that has all the makings of a typical summer camp, except the kids who come here share one exceptional bond.

Since 9/11, 5,000 kids have lost a parent because of war. And a few years ago, Camp Hometown Heroes started as a way to bring those kids together from across the country.

Camper James House's dad, John, was a Navy medic who died in a helicopter crash in Iraq. That was in 2005, when James was just a month old.

"Can you explain to me, how do you miss someone that you've never met?" I asked James.

"I miss him because he's my dad. I might not have met him in person, but he's always with me," he said.

Over the years, James wanted to mourn but says he couldn't, really -- partly because his friends at home, while well-intentioned, weren't saying the right things.

"At school when Father's Day passes that's a big deal. And everyone is making little Father's Day cards and I get a little sad. And they say, 'I know how you feel.'"

But it's not the same.

"[At camp] I get to cry and they can say 'I know how you feel,' and I know they know how I feel. And that's a great feeling."

For many of the kids, camp is their first chance to just let it out. To help in that effort they do a balloon release, where campers write messages to their loved ones.

Dylan Simon lost his dad in 2005. Dylan was a camper for four years, but this year he's back as a counselor.

"My first balloon release was one of the hardest because I had to physically let go of everything that I was holding onto over the years," he said.

A lot of kids say the balloon release is the best part of camp -- and, at first, we could not understand why.

"There's nothing you can say to a kid to make them feel better when someone is gone forever," Dylan explained.

But then something magical happened. The kids started reaching out to one another. Not a word was said because not a word was needed. Proving that sometimes all it takes to let go -- is the right person to hold onto.