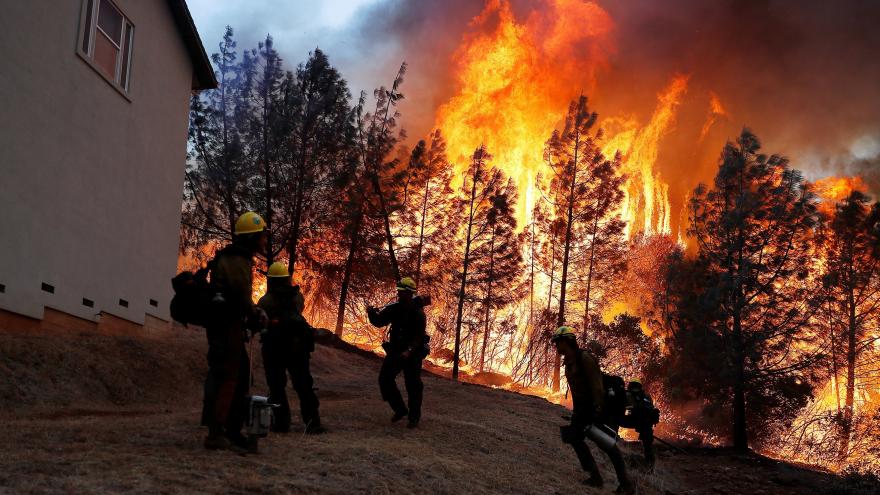 (CBSNews) -- Strong winds were blowing again Monday in California, bringing with them bad news for millions of people hoping to avoid some of the most destructive wildfires the state has ever seen. The whipping winds -- and tinder-dry conditions -- will threaten areas statewide for the rest of the week, fire officials warned.

They said it could take weeks to fully contain the blazes raging across Northern and Southern California. So far, at least 44 people have been killed -- 42 in the "Camp Fire" alone, making it the deadliest wildfire in California history. More than a dozen coroner search and recovery teams looked for human remains as anxious relatives visited shelters and called police hoping to find loved ones alive.

The Camp Fire had burned almost 7,200 structures as of Monday evening, most of them homes -- meaning the Northern California wildfire is also the most destructive in state history. Some 15,000 more structures were threatened. It had chewed up some 117,000 acres.

The Camp Fire is one of three major wildfires burning in the state. The "Woolsey Fire" and "Hill Fire" are burning northwest of Los Angeles.

Players and cheerleaders from the school were on the field for the national anthem, reports CBS San Francisco.

The Air Quality Index at kickoff was at an unhealthy level of 161 due to the wildfires in the region. The smell of smoke was present throughout the stadium.

The NFL had monitored the situation but the AQI never got near 200, at which the game would have had to have been moved.

The Butte County sheriff's office said 13 more bodies have been discovered Monday, bringing the death toll from the "Camp Fire" to 42 in Northern California. It's now considered the deadliest wildfire in California's history.

The Butte County sheriff's office said four victims have been positively identified and their families have been notified. Some 228 people remain unaccounted for.

The sheriff's office said 150 more search and rescuers would arrive Tuesday. There will be 13 search/recovery teams, including three anthropology teams. Officials have requested two portable mortuaries from military.

Officials give latest on "Camp Fire"

A meteorologist with the National Weather Service noted there's no sign of rain in the forecast through this week and possibly into Thanksgiving.

The California Highway Patrol said there are numerous vehicles blocking roadways and said about 60 have been cleared.

Officials have launched a website where residents can view an online damage assessment map. They said data is subject to change as information is gathered and verified. Addresses may be entered in the search bar to find a specific location, they said.

The Butte County sheriff's office said no new evacuation orders have been issued as of Monday night. But they urged residents to be vigilant.

The sheriff's office also said there have been 139 "suspicious incidents" -- 16 of them classified as looting. There have been no arrests.
Trump approves major disaster declaration for California

President Trump has tweeted he will expedite a request for a major disaster declaration for California.

"Wanted to respond quickly in order to alleviate some of the incredible suffering going on," Mr. Trump wrote.

3 major fires by the numbers

Firefighters are battling three major wildfires in California. Here's a breakdown by the numbers as of Monday evening, according to Cal Fire and local officials.