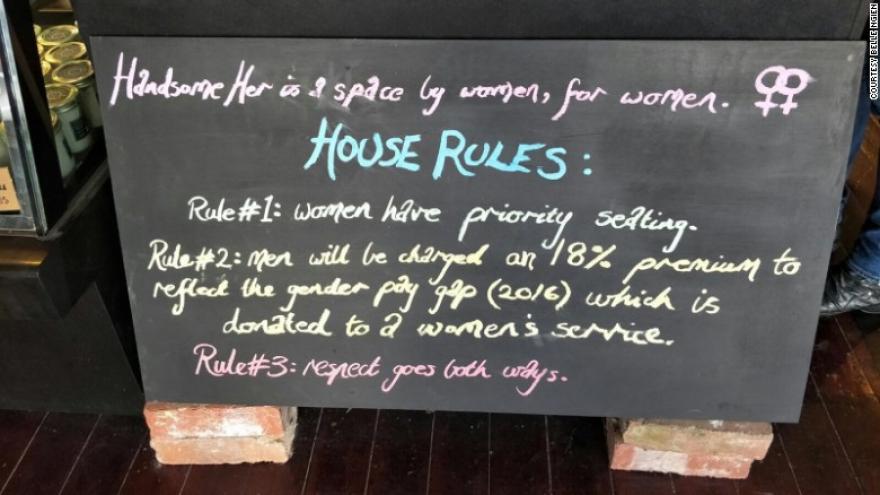 (CNN) A café in Melbourne, Australia, is giving its male customers a side of gender equity with their lattes

At Handsome Her, men are asked to pay an 18% premium to "reflect the gender pay gap." Men earn an average 17.7% more than women for full-time work in Australia, a government report found. The difference is roughly the same in the United States.

The café, which opened its doors for the first time Thursday, is hoping to shine a spotlight on the issue.

"All we really wanted was to raise awareness and start conversations about the gender gap," Belle Ngien, the café's manager, told CNN. The voluntary donations are collected during one week every month and given to women's charities, Ngien said.

But it didn't take long for the Internet to go crazy over the scheme, with some calling Handsome Her's "gender tax" discriminatory.

Others implied the café would run out of money because it wouldn't attract a wealthy clientele. Some had constructive criticism, calling the idea divisive despite its good intentions.

But Ngien is unfazed: "Men have their own spaces that we're not allowed in to, so why not have that space for women?" No one has declined paying the extra 18%, she said.

Indeed, men have come from across town to support the cause, owner Alex O'Brien said in a Facebook post.

"We've had men travel across town to visit us and pay 'the man tax' and throw some extra in the donation jar," O'Brien wrote, adding, "Guys, you're pretty neat."

In the end, Ngien said, no one is turned away based on whether they pay extra.

"Sometimes it's hard for people to change their minds," she said. "We're not in the business of changing people's minds. They are welcome to go elsewhere if they don't want to pay a voluntary donation."

So far, Handsome Her has collected a couple hundred dollars for Elizabeth Morgan House Aboriginal Women's Service. And it's definitely fueled a conversation.