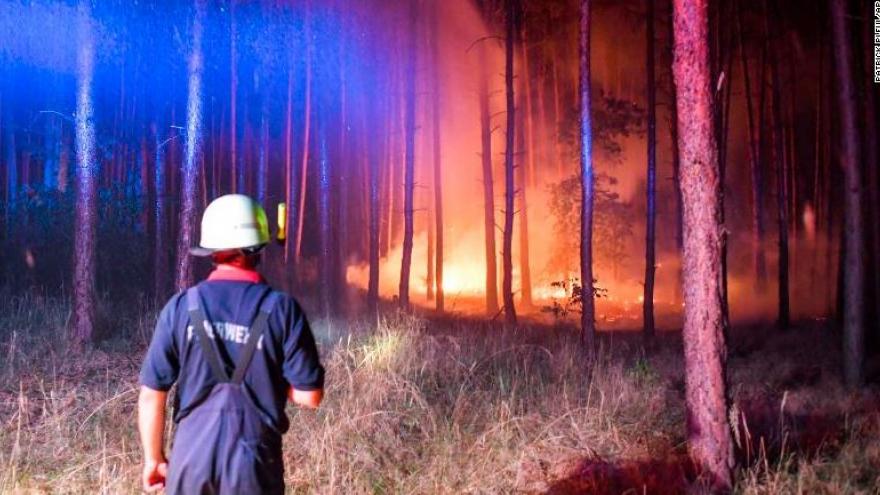 Firefighters initially could not enter the affected area because of munitions in the ground that exploded in the heat, Engel said, adding that the leftover ammunition is "scattered across the area" and the total amount of unexploded material is unknown.

The fire in the town of Treuenbrietzen began shortly after noon on Thursday. At least 550 firefighters, police and members of the military were called in to help control the flames, along with three helicopters, Engel said.

More than 24 hours later, hundreds of firefighters were still fighting the blaze, but there was no longer any danger of it spreading further, according to Engel.

Around 400 hectares of forest were burning at the peak of the fire, the Brandenburg state chancellory said Thursday. Three nearby villages were evacuated.

Speaking at the scene Friday, Brandenburg state Premier Dietmar Woidke said that 350 hectares were still burning, but that the threat to one of the three villages -- Frohnsdorf -- had passed and residents were now allowed to return home.

"The scale of this forest fire is something that Brandenburg hasn't seen, not just in the last year, but for many years," Woidke said, adding that the fire could take days to put out.

Along with many other countries across Europe, Germany has experienced a longer, drier summer than usual. Southern Brandenburg has been hit especially hard by the recent drought that has left forests in the region very dry.

No injuries have been reported and no buildings have been destroyed, Engel said. The cause of the fire has not been determined.

Winds have blown smoke from the fires north to Berlin, where the fire service issued a warning to residents Thursday evening. The fire department had received a large number of calls reporting the smell of smoke, it said on Twitter.

The city was still affected Friday morning, when the fire service advised residents to keep doors and windows closed.