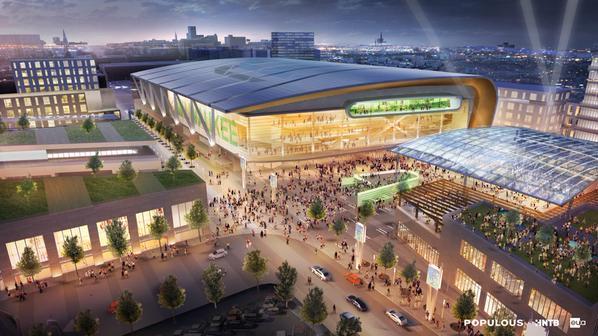 For months, the Milwaukee Bucks have been talking about a new arena, but fans and elected officials have been saying 'Show me more.'

Team owners and the design team did Wednesday morning, unveiling what they're calling a glimpse into the future. They are the first images of a sports and entertainment district that would change the face of downtown Milwaukee.

\"This is the beginning of making this real,\" Bucks President Peter Feigin said during a press conference at the BMO Harris Bradley Center. \"We believe this will revitalize unused space, specifically the park east and connect the city in every direction.\"

The team showed off drawings of a planned $500 million dollar arena, which would seat 17,000 people, and another $500 million dollars worth of entertainment district development. The complex would be built on the park east land, which sits mainly empty, north of the Bradley Center.

The plans also include building an on-site practice facility that would replace the team's current one it leases at the cousin's center.

\"[We picture] an arena designed with maximum flexibility that can accommodate varied sports and entertainment,\" Feigin said.

Team and design officials say the goal is to connect all nearby areas, like Old World Third Street, the Brewery and Bronzeville, to create an urban atmosphere that's not just for basketball, but also concerts and shows that can be utilized year-round.

The project relies heavily on $500 million in housing, hotels, restaurants and other commercial real estate projects which would build around the arena itself. The Bradley Center would be demolished and replaced with some of those developments.

\"They're all looking for a venue, an opportunity where there's momentum and energy,\" Commercial Association of Realtors Wisconsin President Tracy Johnson said. \"I think this site, this location, this opportunity really presents that.\"

None of that development happens though without first securing funding for the arena itself. That means finding city, county and state funding up to $250 million.

\"I look at the pictures today and I really can't envision Milwaukee or Wisconsin turning its back on a billion dollar opportunity,\" Metropolitan Milwaukee Association of Commerce president Tim Sheehy said.

The City of Milwaukee and Milwaukee County have talked about chipping in $25 million each, but County Executive Chris Abele says he can't promise any firm number yet.

\"The county will do everything it can responsibly to make this happen,\" Abele said. \"But we are confident and I think most of the partners are that we'll get to 'yes.'\"

The benefits to the state, the region and Milwaukee in terms of jobs, attracting investment and growing the tax base are key ingredients. That's why I continue to support the governor's plan. I appreciate the efforts of all the interested parties to step up and continue working to make this project a reality.”

If it can secure state and local funding, the Bucks want to start construction by early fall and having the arena complete in time for the 2017 NBA season.

Mike Fascitelli, member of the Bucks ownership group, said it would take two years to build the arena.

Professor David Sneig who specializes in sports and entertainment management at Concordia University says the reaction might not be instant to developing the area around the proposed arena location.

\"I think people are waiting to see if that arena financing can get buttoned up first,\" Professor Snieg said during a live interview with the CBS 58 News at 4. \"Once that possibly happens I think a lot of other groups will feel better about coming into the area.\"

While critics often bring up how taxpayers are still paying for Miller Park, Professor Snieg says that's not a complete picture.

\"You hear a lot of people talk about the taxation we're still dealing with in the five county sales tax, but what they forget is that Miller Park is still contributing $300 million to the local economy on a yearly basis every year for the past decade. And the team does not have to have a winning record to do that. We've seen people flood the gates at Miller Park to enjoy entertainment overall.\"
Share this article: