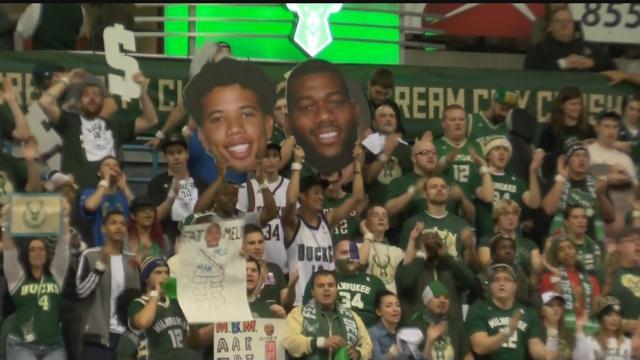 This is the first time the Bucks have opened their season, first regular season game at home in 30 years.

Fans came out in full support for Wednesday night’s game against the New York Knicks.

It was quite the show to tip-off the 2015-16 Milwaukee Bucks regular season at the BMO Harris Bradley Center.

Each fan was given a wrist band that light up in the dark to add color to the Bucks introduction and help rock the house at the BMO Harris Bradley Center.

"It's a great feeling,” Bucks fan Jesse Marshall said. “We've been in the dumps for a while under Herb, no offense. But yeah, we're on the right track and we're going to win a championship pretty soon I say."

The new possibilities mean Scott Lofton had to make sure he and his wife have great seats to enjoy the game up close.

(Reporter) Spending a little change for your wife?

Before tip-off Wednesday night, it wasn't hard to find the loudest group inside the BMO Harris Bradley Center.

"The vibe, the team, the new players, the new logos, the new attitude, the new energy,” DJ “O” said. “Everything feels refreshed."

Despite Wednesday night’s upset loss to the New York Knicks, some fans say they believe this is the best Bucks team since 2001 when Ray Allen and company took the team to the Eastern Conference Finals.