Brutally Honest: Is it OK to be naked in front of your kids? 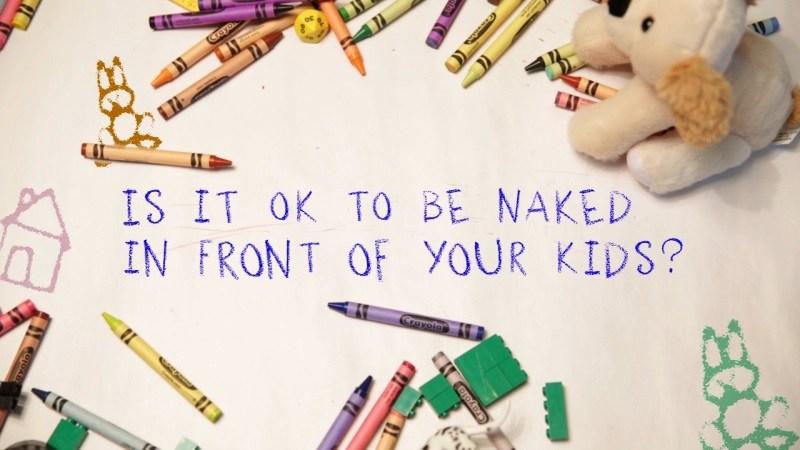 (CNN) -- Let me say at the start that there is no way around the topic of nakedness in front of your children without getting personal and slightly uncomfortable. I'm already feeling somewhat tense as I type this.

I joke that the only person who should have to see me naked is my husband. He signed up for it, right? My kids certainly didn't.

A lifetime of body image issues means I'm not one to walk around naked at home. But I don't cover up around my daughters, 7 and 8, when I'm getting dressed or in the bathroom, either. I don't want them to think there is anything wrong with my body or theirs.

And when they ask hilarious questions such as \"Mom, why do your boobs hang?,\" I can't help but laugh and use the opportunity as a chance to tell them my body has changed over time and theirs will, too.

In conversations over email with mothers and fathers across the country and in Canada, it's clear there is no \"one size fits all'\" approach to the questions of whether it's OK to be naked in front of your kids and if there's an age when it's no longer OK.

Rhonda Woods, a mother of three, says ever since her children, now 20, 13 and 13, were little, she and her husband have been teaching them not to be ashamed of their bodies. They have also never hidden their bodies from their kids, she said.

\"So when it is time for me to undress, I tell whichever of my kids is in my room talking to me, that I plan to do so and they have the option to leave.\"

A common theme I heard from parents is comfort. If both you and your children are comfortable with you being naked in front of them, there isn't anything \"inherently wrong with that at all,\" said Avital Norman Nathman, who says her 8-year-old son is used to seeing her and her husband naked on occasion when they are getting dressed or in the shower.

\"If my son were ever to say or even act as if he was uncomfortable by it, we would of course respect that,\" said Norman Nathman, editor of the motherhood anthology \"The Good Mother Myth: Redefining Motherhood to Fit Reality\" and founder of the blog The Mamafesto.

\"Nudity, when it's within your home and 100% nonsexualized, isn't going to traumatize a child, especially if you're all on the same page, are all consenting and are all comfortable with it.\"

Nancy Friedman, a New York City mom of two middle schoolers, said while every child is different, most kids make it clear when their mom or dad's nudity no longer works for them.

\"I think your kids let you know when it's time to stop being naked in front of them -- usually about the time they decide they don't want to be naked in front of you,\" said Friedman, co-founder of the video sharing site for tweens called KidzVuz.

As children age, they certainly develop their own sense of modesty around others, said Micky Morrison, a mom of two in Islamorada, Florida, and founder of BabyWeightTV.

\"But even my 12-year-old son doesn't hesitate to undress in front of me. I figure that he will one day, and that's OK,\" said Morrison. \"Perhaps one day he will avert his eyes or become uncomfortable with my nudity as well. And that's OK, too.\"

Amanda Rodriguez, a mom of three boys in Frederick, Maryland, said she reached a point with each of her sons, usually no later than age 5, when she thought it was no longer OK to be nude around them.

\"I began to feel uncomfortable being naked in front of them because of the questions and the poking and prodding and search for Mommy's 'inside penis' -- that's what they thought a vagina was,\" said Rodriguez, founder of the blog Dude Mom.

\"I don't think it makes them terrible people or scars them for life if they stumble into the bathroom while I'm going, but it's easily avoidable awkwardness none of us really needs to experience on a daily basis.\"

Terry Greenwald, a divorced father of three, puts himself solidly in the no-being-naked-in-front-of-kids' camp.

\"It would be very difficult to teach children any sort of modesty and humility if a parent thought it OK to be naked in front of their children. It also would bring up questions and conversations they might not be ready to handle,\" he said.

Blogger: Why I want my sons to see me naked

A few months back, a post by blogger Rita Templeton about why she wants her four sons -- ages 2, 5, 6 and 9 -- to see her naked, was republished on The Huffington Post and went viral. Templeton said she wanted her sons to see what \"real\" women look like before they are bombarded with an ideal in the media that doesn't match reality.

\"Before they are exposed to boobs that are as round and firm as cantaloupes and pictures of taut, airbrushed, dimple-less butts, I'm exposing them to a different kind of female body. Mine,\" wrote Templeton, who blogs at Fighting Off Frumpy.

Her words led to an onslaught of hate mail, nasty tweets and accusations she's sexualizing her sons, she said. Buzz Bishop, a father of two boys in Calgary, wrote a blog post of his own in part as a response to all the outrage. He says he has been playing games called \"naked baby\" and \"naked daddy\" at bath time since his children were little while at the same time he teaches his kids not to stare when they are in the open shower in the men's bathroom at their neighborhood pool.

There doesn't seem to be much science to help guide us on whether it's better or worse for your child, or it makes no difference at all, if they see you naked. I couldn't find many studies when I searched for them, and those I found had conflicting findings.

For instance, one study found no negative impact on adolescents who regularly saw their parents naked at ages 3 and 6, but another study found that parental nudity when kids were ages 6 to 11 resulted in more permissive attitudes about sex and increased sexual frequency.

For some parents, like Maryellen, a mom of two young girls on Long Island, who only wanted to use her first name, it's all about convenience.

\"I'll be honest. Sometimes it's easier and faster just to pull them into the shower,\" she said. \"But my girls are 4 and 6. A year from now I may not be doing it any longer. By then, they may be showering by themselves (dare to hope?)\"

Do you think it's OK to be naked in front of your kids? Share your thoughts with Kelly Wallace on Twitter or CNN Living on Facebook.