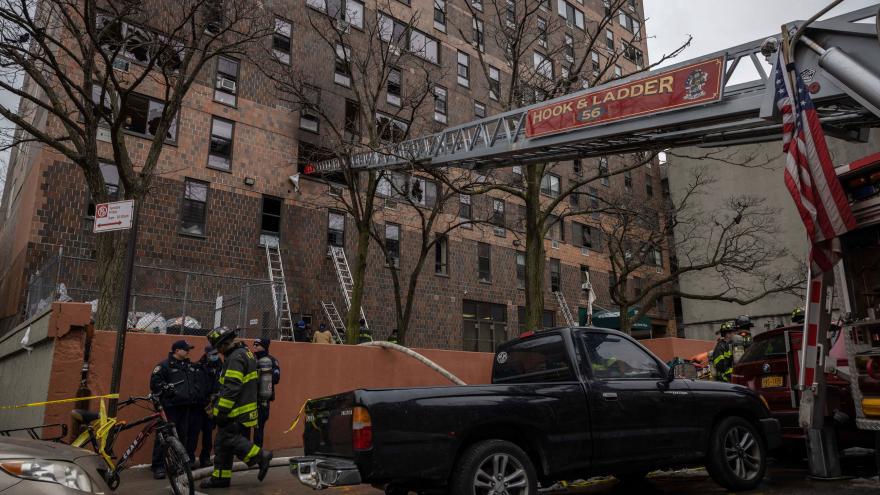 (CNN) -- A malfunctioning electric space heater in a bedroom was the source of an apartment building fire Sunday in the Bronx that killed 19 people, New York City's fire commissioner said, in a tragedy that marks one of the city's worst fires in modern history and raises major safety questions.

Now, the building's fire alarms and a series of open doors are on the radar of investigators and officials probing the second major deadly fire in a week in the Northeast.

"This is a horrific, horrific, painful moment for the city of New York, and the impact of this fire is going to really bring a level of just pain and despair in our city," said Mayor Eric Adams, who described those displaced as from a largely Muslim community, with many immigrants from the West African nation of Gambia.

The five-alarm fire began shortly before 11 a.m. ET and first consumed the bedroom, then the entire duplex apartment on the second and third floors of the 19-story building, Nigro said.

When residents left the unit, the apartment door was left open, he said.

"The smoke spread throughout the building, thus, the tremendous loss of life and other people fighting for their lives right now in hospitals all over the Bronx," he said. "So, we are investigating where everyone was found, how the smoke traveled, but certainly the marshals have determined through physical evidence and through firsthand accounts by the residents that this fire started in the bedroom, in a portable electric heater."

At least one door also was open from the stairwell to an upper floor, Nigro said.

"Smoke and heat travel upward, that we know -- that's what happened here," he said. "It was a very difficult job for our members. Their air tanks contained certain amount of air -- they ran out of air, many of our members -- and they continued working to try to get as many people out as they could."

About 200 members of the New York City Fire Department responded to the fire at 333 East 181st Street, the agency said. Units arrived on scene within three minutes of getting an emergency call, Nigro said.

Fire department personnel "found victims on every floor in stairways," he said, many of them in cardiac and respiratory arrest.

Covid-19 related staffing challenged "played absolutely no role" in the department's response, Nigro said. "It's a challenge, but every one of our units is fully staffed -- fire and EMS," he said.

It was common for fire alarms to go off in the building, 10th-floor resident Chanasia Hunter told CNN affiliate WABC.

"So, when you don't know that it's a fire, like, you know, how would you supposed to know if it's a fire or if it's always going off?" said Hunter, adding she got a call from a resident on the third floor warning her of the fire, then a knock on her door telling her and her family to get out.

Reports that smoke alarms frequently malfunctioned will be looked into, Nigro said, adding he couldn't confirm them.

The building had no fire escapes, but "there are interior stairways," he said. "So, the residents should know where the stairwells are, and I think some of them could not escape because of the volume of smoke."

New York passed a law in 2018 making self-closing doors a requirement in buildings with three or more apartments.

There have been no major building violations or complaints listed against the building, which contains 120 units, according to city building records. Past minor violations were rectified by the property, and no structural violations were listed.

Built in 1972, the building was federally funded so may have been built outside the New York City fire code, Nigro said, adding that was unlikely to have been a factor in Sunday's blaze.

"Certain federal buildings can be built under different standards. But to be perfectly clear, the fire itself -- other than getting in the hall because the door was open -- never extended anywhere else in the building, so that was not a factor."

The "tragic and terrifying" fire underscores the need for federal investment in affordable housing, said Congressman Ritchie Torres, who represents residents of the apartment building.

"Many of these buildings are old. Not every apartment has a fire alarm. Most of these buildings have no sprinkler system. And so the risk of a fire is much higher in lower-income neighborhoods in the Bronx than it might be elsewhere in the city or in the country," Torres told MSNBC.

"When we allow our affordable housing developments to be plagued by decades of disinvestment, we are putting lives at risk. These buildings are wide open to catastrophic fires that can cost people their lives, including the lives of children."

The Bronx has been the scene of other grave fires in recent decades -- the most deadly in 1990, when 87 people died at the Happy Land social club. In 2007, 10 people -- nine of them children -- were killed in a fire at a residence after a space heater cord overheated.

In December 2017, 13 people died when a fire broke out at an apartment block. The fatal fire began when a 3-year-old played with burners on the stove and started a kitchen fire, officials said. When the boy's mother fled the apartment with him and his 2-year-old sister, she left the door open.

The apartment's stairway acted "like a chimney," and the fire rapidly spread through the apartment building, Nigro said at the time. After that fire, the city passed the self-closing door law.

After Sunday's blaze, Secretary of Housing and Urban Development Marcia Fudge tweeted: "I send my deepest condolences on the devastating loss of life from today's fire in the Bronx. HUD stands ready to assist however we can. My thoughts and prayers are with all those who have been impacted by this tragedy."

Emergency shelter for residents is a priority

The city will work to ensure Islamic funeral and burial rites are respected and will seek Muslim leaders to connect with residents, said Adams, who took office only this month. The names of those who request government assistance will not be turned over to Immigration and Customs Enforcement, he added.

Residents of the apartment building were initially housed at a middle school next door, and longer-term shelter for them would be found, said Christina Farrell, first deputy commissioner of NYC emergency management.

"We work with the Red Cross. We have hotel rooms and have other resources available. And so, we will be making sure every family has a safe, warm space to sleep in tonight," she told CNN on Sunday. A service center will be set up Monday, she said.

New York Gov. Kathy Hochul will establish a compensation fund to help provide the victims of the fire with money for housing, burial costs and other necessities, she said Sunday at a news conference.

"I am horrified by the devastating fire in the Bronx today," Hochul said on Twitter. "My heart is with the loved ones of all those we've tragically lost, all of those impacted and with our heroic FDNY firefighters. The entire State of New York stands with New York City."

Also being examined is federal aid, including housing, tax and immigration assistance, "so families can be reunited," Senate Majority Leader Chuck Schumer said at the news conference.