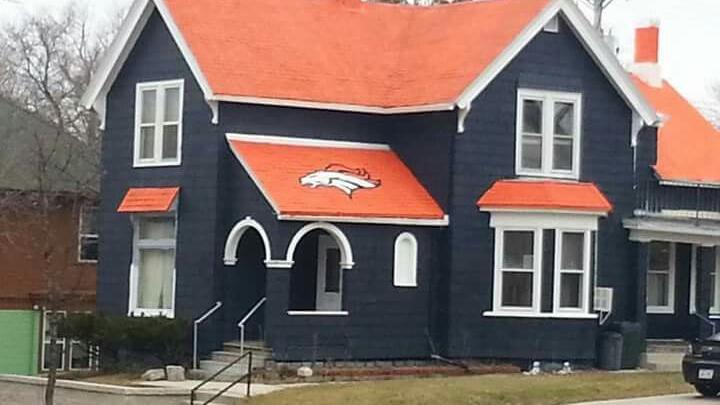 Deep in the heart of Packers Country, sits a home that doesn't fit in. Coated not in Packers green and gold, but in orange and blue, complete with a Denver Broncos logo on the roof.

"It took about a year altogether," says Kober. "It was a lot of work, I stripped everything before I painted, so it would last."

He's heard it all, from neighbors who pass by.

"You'd be surprised with what i hear mostly, it's all good!"

But as it turns out, the final colors were not part of the original plan. But just like his favorite sport of football, life can be tough to predict.

"When we started painting, my wife was diagnosed with cancer," says Kober. "The last three and a half months of her being here were rough, she didn't get to see the finished product."

In the months after her passing, Kober began adding orange, a tribute to his wife's favorite team. The pair were also Packer fans, and were dreaming of a Broncos Packers Super Bowl rematch.

"I should have done the alley side in the back of the house green and gold," says Kober. "Then I wouldn't have to explain to everybody that I'm a Packers fan too"

His house has attracted visitors from across the country, who stop to drop off Broncos memorabilia and snap pictures. Every time it happens, he's reminded of why he painted the house, a moving tribute to his late wife.

"My wife's on my mind every day. Every day I miss her a whole lot. She'd like it, i know she'd like it."