British Police Find 15 Migrants in Back of Refrigerated Truck 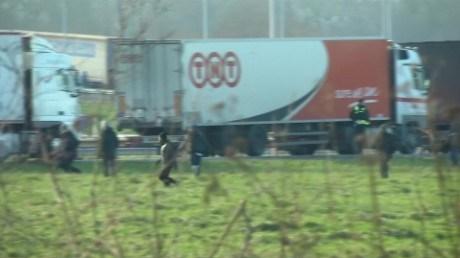 (CNN) -- British police say 15 people suspected of entering the country illegally were discovered in the back of a refrigerated truck Friday.

In a statement, Surrey Police said the group included five children and came from Iraq, Iran and Syria.

Police say the driver called authorities after hearing a loud banging coming from inside the vehicle.

According to the British Home Office, 11 males, including "five who claim to be minors", were arrested.

One of the men was taken ill at the scene and transferred to hospital, where the Home Office says he remains.

The five other men have been passed onto immigration officials for assessment while the juveniles will be met by social services.

A family of four, including two children, was also encountered at the scene. The Home Office said they will be interviewed by immigration officials.

In September, Britain announced it was building a four-meter (13 foot) high wall as part of a £17 million ($23 million) deal struck with France in an effort to block migrants from crossing the English Channel.