MILWAUKEE (CBS 58) – While the game of baseball is timeless, the fan experience evolves every year, and that remains true for the 2021 season which will have safety protocols because of COVID-19 as well as changes the Brewers hope enhance the game day atmosphere.

“This is a true milestone day,” Brewers President of Business Operations Rick Schlesinger told reporters. “There are many milestone days but this is a big one for us to officially sort of launch American Family Field.”

To kick off Preview Week, the team’s mascot, Bernie Brewer, took his inaugural ride down his slide in left field. The home run tradition looks different this year. The slide changed colors from yellow to white and Bernie has a new home at the top of the slide dubbed “Bernie’s Chalet.”

“It harkens back to County Stadium,” Schlesinger said. “So we thought we’d have a little fun with it, create some personality, give it some life, give it some vintage history but also contemporize it.”

The chalet’s design includes a nod to the stadium’s new namesake with a roof similar to the one in the American Family Insurance logo.

“To have that roofline present in the chalet seemed to just have a natural fit in that element as we talked about bringing that back,” American Family Insurance President and CEO-elect Bill Westrate said.

Schlesinger and Westrate applauded the partnership between the team and company.

Bernie’s Chalet is just one of the new features in the stadium.

Fans will also get to experience the Miller Lite Landing for the first time. Found in left field, the feature was new for the 2020 season but due to the pandemic, has not yet been visited by fans. It features a bar, standing room and seats with a view of the field. To begin the season, the team said it will be ticketed seating in the section with the hopes of eventually expanding for larger groups to be able to rent it out for outings. The area and other parts of the stadium are meant to cater to younger fans.

“We need to do better engaging the younger fan and what they’re telling us is that they want group spaces they don’t want to sit in a particular seat for all nine innings and they want to have some fun activities and be able to mingle and congregate, mingle and socialize and this is sort of trying to accomplish that goal,” Schlesinger said.

The stadium’s capacity will be reduced to 25 percent to begin the season as part of an agreement with the city’s health department. Still, the team said they are eager to welcome fans back.

“For fans to be here starting Opening Day, even at a 25 percent capacity restriction, we know they’re going to bring energy, excitement, we’re thrilled to engage with our fans,” Schlesinger said. “Baseball is a product best consumed in the live experience.”

To enforce physical distancing for fans, some seats will be restricted with zip ties, while others remain open. The team said they are collaborating with the city to ensure a safe experience for fans but have their eye on ramping up capacity as soon as they can.

“As we evolve and vaccinations increase and we work with the city health department, frankly, anything’s on the table,” Schlesinger said. “My goal is how do I get more fans here in a safe, responsible manner and ultimately get to a full stadium so if that means potentially you’d have some sections were you have people who have vaccines can sit and congregate in a normal environment, I’m open to that, sure, but we’ll wait and see as things develop and see what the city health department recommends.”

Attached below are new guidelines for fans attending a Brewers game at American Family Field this season. 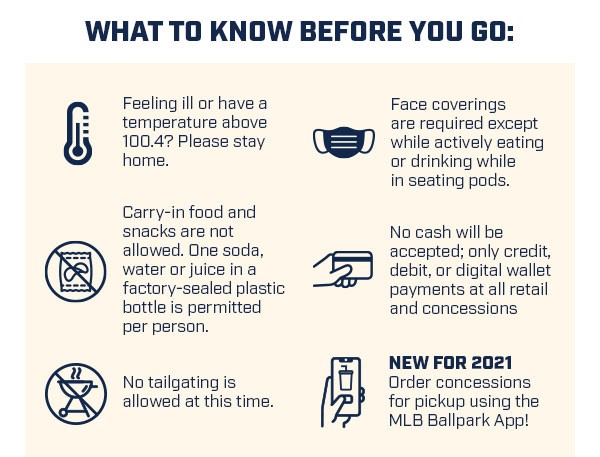 Alongside a new name to Milwaukee's home park, the Brewers completely renovated the famous Bernie Brewer home and slide into "Bernie's Chalet" which features a white home for Bernie to watch the game from and a brand new white slide to ride down after every Brewers home run.

Other additions include more signage that features Milwaukee's updated logo alternatives around the park as well as the Miller Lite Landing area above left field. The Landing was new to the stadium last year, but will be available to fans for the first-time during Opening Day against the Twins on April 1.