Brewers fans ready to get season under way 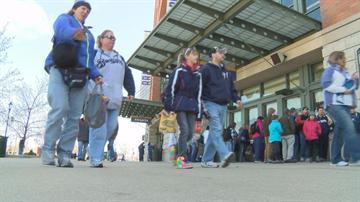 \"It's great day today to live in Wisconsin,\" one fan said.

You certainly didn't hear that much the last few months.  But as the Brewers got ready to take on the Kansas City Royals in  the final tune up before Opening Day, people from all over the state were ready for warmer weather.

\"Oh yeah, we still have three feet of snow up there,\" Park Falls native Emily Armstrong said while tailgating with family.

The four hour drive makes her appreciate these rare trips  to the ballpark.

\"Honestly, it just gets us all together,\" Armstrong said.  \"We all come out every year and just get to spend time with each other.\"

Milwaukee's John Diez has a much shorter trip.  \"I'll be here a lot,\" Diez said.  \"Second home.\"  He says this is a unique time of year, with a lot of talk  in the parking lot about two area teams.

\"There's an aura around here, with the Badgers, with the Brewers starting up,\" Diez said.  \"I mean tonight, go Badgers.\"

\"Sign of summer coming around,\" Steve Mollet said.  \"The Final Four, obviously, with the Badgers and Brewers kicking off the season, very exciting times.\"

Fans think the Brewers can turn that excitement into a winning season, with everyone dreaming of a championship... almost.

\"I think we can make the playoffs this year,\" fan Brian Wadzinski said.  \"We've made some good upgrades to the team.\"

\"All the way, all the way,\" young fan John Lilek said.  When asked if he's confident about that, Lilek laughed, \"No.\"

The Brewers open the season at home against the Atlanta Braves at 1:10 Monday afternoon.