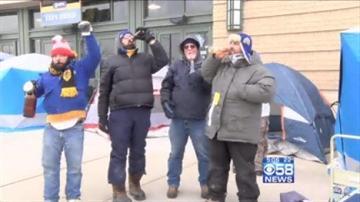 MILWAUKEE-- Dozens of brewers fans started lining up outside of Miller park on Friday afternoon to get their hands on some Opening Day tickets.

It's a tradition for many, including Jason Bardega, who's gotten the first spot in line 4 years in a row.

\"we know whos showing up, who is first, who is second, nobody tries to cut in front of anybody, this is our arctic tailgate family,\" said Bardega.

This year, Brewers fans were not allowed to camp out starting Thursday, due to the frigid temperatures. But that didn't stop fans like Bardega, from getting there early.

\"we came down here on wednesday, we got kicked out, we came back on thursday and we slept in our cars,\" said Bardega.

Opening Day tickets go on sale on Saturday, March 1st at 9 a.m. There are only a limited amount of tickets and they will only be sold at the Box Office, not online or over the phone.