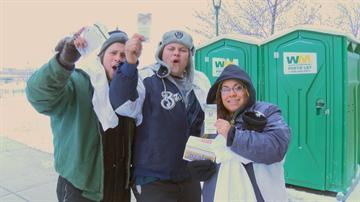 MILWAUKEE -- Cold, wind and snow couldn't keep all Brewers fans away from Miller Park this weekend.

Devotion to get tickets for their team -- put to the test by the elements.

Glass couldn't set up as early at the Arctic Tailgate this year.  The Brewers decided the weather was too cold, keeping camping ticket seekers away until Friday at noon.

\"Like eight layers of clothes on and hand warmers and beer,\" Glass said of his equipment keeping him warm.

Glass didn't mind the later start -- one night of camping was plenty for him.  But it's an experience he wouldn't miss.

\"It's like a small community, like a family,\" Glass said.  \"We see each other every year, so that's nice.  A few new faces.   Not as many people this year as the last few years though.\"

Temperatures hovering not far above zero kept some regulars at home.  But when doors to Miller Park opened at 7 a.m. Saturday,  plenty of Brewers faithful showed up.

Life-long fan Doug Rupert got in line at 5:30 Saturday morning.  He says it doesn't matter if you camp out or not, as long as you root for the home team.

\"This is a unique thing with Milwaukee,\" Rupert said.  \"It's a big party atmosphere and I think it's awesome.\"

The ticket windows opened at 9 a.m. with most fans gunning for limited Opening Day tickets.  Former Brewers greats joining the crowd think Saturday marked the true start of the season.

\"When you come here, it really gets you warm, you start thinking about baseball, about spring,\" former pitcher Jerry Augustine said.  \"We have some great fans and  they're excited about this Brewer ball club.\"

\"Fighting the cold for tickets for Opening Day elevates them to a stature that is unparalleled in baseball,\" former outfielder Larry Hisle said.

The Brewers open the 2014 season March 31 at Miller Park against the Atlanta Braves.